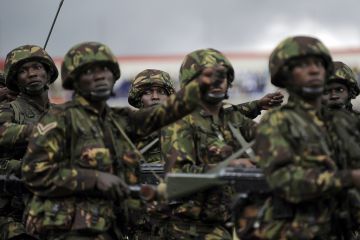 In an effort to improve Kenya’s counter-terrorism operation, the US has promised to send eight drones as part of a 40+ million dollar military aid package to the African nation. The package is part of the ongoing efforts by the US to curb the power of suspected Islamist terror cells around the Middle East and Africa.

“This assistance will improve the tactical effectiveness and operational reach of the Kenyan National Defence Forces engaged in CT (counter-terrorism) operations against al Shabaab in Somalia,” the Wall Street newspaper quoted a Pentagon document as saying.
The Kenyan military aid package is part of a larger counter-terrorism initiative aimed at tackling Islamic militant groups such as Al-Qaeda and Al-Shabaab militants in the region. The aid promises to deliver trucks, communications gear and rifles to Burundi, Djibouti and Uganda.
The drone is known as ‘Raven,’ and unlike the Predator drones, the Raven possess no offensive capabilities. The primary use of these hand-launched drones is reconnaissance, as it is mounted with infrared surveillance and real-time colour imagery, and a self-guiding GPS navigational system. The craft is meant to identify potential targets for the military, allowing them to spot the movements of suspected terror groups and neutralize them before they pose a threat.
Drones have gained notoriety for their widespread use in places such as Afghanistan and Pakistan. Over the past decade there have been several recorded instances where drone strikes had been carried out on civilian targets, mistaking them for enemy combatants. The use of drones with offensive capabilities has been met with disapproval by many people, mainly due to the fact that there have been so many civilian casualties as a result of the strikes.
The sale of the Ravens to countries other than the US is nothing new. Last year the US delivered four Ravens to Uganda and Burundi in their efforts to crack down on local terror cells. The company which produces the drones, AeroVironmentInc, sells the unarmed drone to 18 different countries. By giving the Ravens to the governments of potential ‘extremist hotbeds,’ the US can begin decreasing their presence in those regions whilst maintaining an effective suppression on their enemies. By placing the fight in the hands of the nations which host these hotbeds, the US could save themselves both the money and the manpower in a global conflict that has seen the military budget severely strain the US economy.