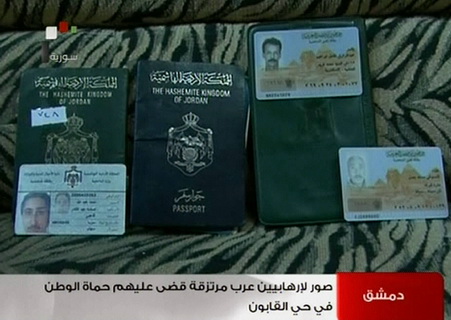 Syrian Arab News Agency has reported that the Syrian army has recovered the bodies of two dead Egyptian nationals.

The state run news outlet is claiming they were “terrorists” fighting on the side of the rebels.

The SANA website has published photos that show the bodies of five men soaked in blood and laying in body bags.

The site refers to the men as “terrorists,” a blanket label that has been used to describe all the forces fighting against Syrian President Bashar Al-Assad.

Along with the photos of the bodies are snapshots that reportedly show documents resembling Egyptian identification cards belonging to Abdullah al-Desuqi Musa’ad Bassal and Yasser Abdelrazzaq Kamel Ibrahim.

The bodies were said to be found in al-Qaboun, a neighbourhood in the north of Damascus.

The two men, according to the identification cards displayed on the SANA website, were from Alexandria and Damietta.

In al-Qaboun and other Damascus neighbourhoods the anti-Assad rebels have been engaged in a week of street battles with the Syrian army and the feared Shabiha militia men who are not formally accountable to the Syrian Army but appear to be operating as an official arm of the Al-Assad government.

Videos of al-Qaboun from earlier in the year show the Shabiha walking through the streets with heavy weapons and black clothing.

Along with the two Egyptians, the bodies of Jordanians were also shown with their passports open next to their corpses.

The SANA reports are reminiscent of past accusations made by dictators under stress, blaming foreign forces of sowing discontent and instability.

Al-Assad has repeated this assertion, and Monday’s press statement from SANA refers to footage on Syrian TV of, “other terrorists who came from Tunisia and Libya, with Turkey and other neighbouring countries providing facilitations to allow these murderers to enter Syria and kill its people.”

According to the Foreign and Expatriates Ministry in Damascus, the accusations against the Al-Assad government are “a methodical media campaign targeting Syria to prepare world public opinion for the possibility of military intervention on the false premise that weapons of mass destruction (similar to what happened with Iraq) or the possibility of using such weapons against terrorist groups or civilians, or transporting them to a third party” referring to the rumours of chemical weapons arsenals and Syria’s relationship to militant group Hizbollah.

Regardless of the presence of Egyptian fighters in Syria, there is anger at the Al-Assad regime in Egypt.

In a speech after being sworn in, Morsy said, “there must be an end to the bloodshed in Syria.

We want the bloodshed of our Syrian brothers to stop. And we will work hard in the near future to achieve this end.”