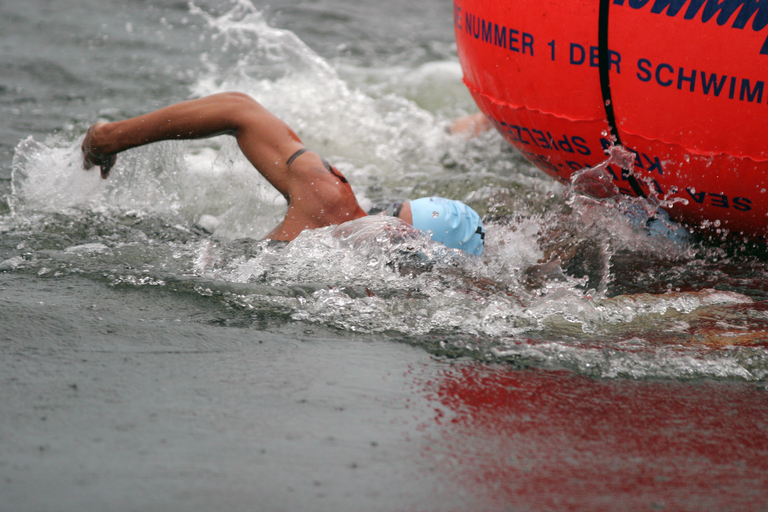 Egyptians Mazen Aziz and Hadia Hosny El Said are just two of many athletes who personify that statement, as they get set out to march with the Egyptian delegation around the Olympic Stadium in London.

Aziz, a 22 year old marathon swimmer from Cairo, is an architecture student at the Southern Illinois University (SIU), which he joined on an athlete’s scholarship seeking better coaching in his sport.

He is one of only two Arabs, the other is Tunisian Oussama El Mellouli, competing in the 10km marathon open water race at the Olympics following years of dreaming about the Games.

Aziz grew up swimming at Al Shams Club and made the national team competing in the 400m and 1500m freestyle. He switched to open water swimming in 2006, although his national records in the pool stand to this day.

“In 2006 there was a marathon world cup in Ain Sokhna and they suggested I try and compete. I came sixth on my first try, so I was encouraged to continue,” says Aziz of his switch from the pool to the sea.

In 2009 he was competing in the World Championships in Rome and was approached by American coach Rick Walker, who offered him an athletic scholarship at SIU. Aziz declined at the time because he was happy to continue with his Russian coach in Egypt, who had been the reason for his amazing progress, including a third-place finish in the 2008 World Cup Series.

But Aziz was cornered when the Egyptian Swimming Federation fired his coach despite promising to keep him if he managed to place in the top 20 in the World Championships. Aziz placed ninth but his coach got the axe and he says he had no choice but to search for a better mentor elsewhere.

“When I came ninth in Italy I was so happy, assuming they were going to keep the coach, but they fired him anyway,” recounts Aziz. “So I emailed Rick (Walker) right away and told him I’ll come. I didn’t want to stay in Egypt without the coach who had had a huge impact on me.”

Now three years into his studies, Aziz maintains a commendable 3.2 GPA and competes both in the pool and on open water for SIU. He says he always “dreamed of the Olympic podium” and managed to clinch a spot in London after a tough qualification race in Setubal, Portugal last month.

He says: “It was amazing to finally qualify. It wasn’t easy at all. It was seven days of hell. First the jetlag with the seven-hour difference between Portugal and Chicago, I wasn’t getting any sleep at all. So it was very stressful. But for sure when I was done and I found out that I qualified I was the happiest person in the world. That was my goal since I started swimming when I was four-years-old.”

After his qualification, Aziz stuck to a gruelling 18km per day swimming schedule back in Chicago before he went to a training camp in Italy, a strict regimen that is enough reason for him to hope for a top five finish in London.

“Since I was so young I was always dreaming of a podium at the Olympics. But if I finish in the top five I couldn’t ask for more,” he says.
He will have to deal with the frigid waters of the lake in Hyde Park, which has a harder current and is heavier than the ocean water he prefers, but inspired by the help he received from the legendary late Abdel Latief Abou Heif, the marathon swimmer of the 20th Century, Aziz believes a medal is within in his reach.

Hadia El Said’s struggles practising badminton in Cairo are a testament to her perseverance.
The Cairene, who turns 24 on Monday and is a Medical Biosciences graduate student from the University of Bath in the UK, was initially a gymnast who also played squash and rode horses.

Ironically her squash instructor at school was on the national Egyptian badminton team and suggested she give it a try. After only three weeks of training, she snagged third place in the Under 12 National Championships. Her fate was decided that day, 12 years ago.
El Said, who has a Pharmacy degree from Ain Shams University, is heading to her second Olympics, having made her debut in Beijing four years ago. She made history and became the first ever Egyptian and Arab to qualify to the Games in badminton, a sport dominated by Asian nations like China and India.

The last time she went she had only booked her spot 13 days before the Olympics after another contestant pulled out. El Said was number one on the reserves list and she did not disappoint, beating a higher-ranked Mexican opponent in her first round. She was knocked out in the second. To qualify for London she had to fight off rigorous competition from three other African players to clinch the top continental spot and secure a place in the 2012 Olympics.

With badminton being a relatively unknown sport in Egypt, she describes how she struggled to even find a place to practise in Cairo. She says there was no regular hall for national team members to use, so there were many times where she had to do with physical training sessions or running at the Heliopolis Club instead of doing actual on-court work.

“I used to kill myself trying to find a practice session, let alone train well. I used to try and coach myself. I really suffered,” she explained.

As the revolution unfolded last year she realised, with encouragement from her father, that she needed a proper plan to train if she were to qualify for London. So she applied for numerous schools in the UK for a masters degree.

“I picked the schools with good badminton programs, so I could qualify to the Olympics. That was my purpose and goal and my dad really encouraged that idea,” she said.

She ended up in Bath studying while also playing for the university’s team. She spent her last few weeks juggling intensive training sessions and working on her thesis. She is ready for her second shot at the Olympics.

On her goals for London she added: “I want to perform better than last time. I’ll do my best to win. Hoping for a medal is difficult but I can dream about it, and you never know, God can bless me and make it happen.”

She isn’t optimistic about returning to Cairo after graduating at the end of this year and admits she will perhaps be forced to quit the sport if she doesn’t stay longer in the UK.

Whether the circumstances in Egypt will improve for the likes of Aziz and El Said for them to be able to master their craft at home to try again for Rio 2016 is unclear, but for now they can celebrate the lengths they went to, and distances they travelled to conquer their dreams.