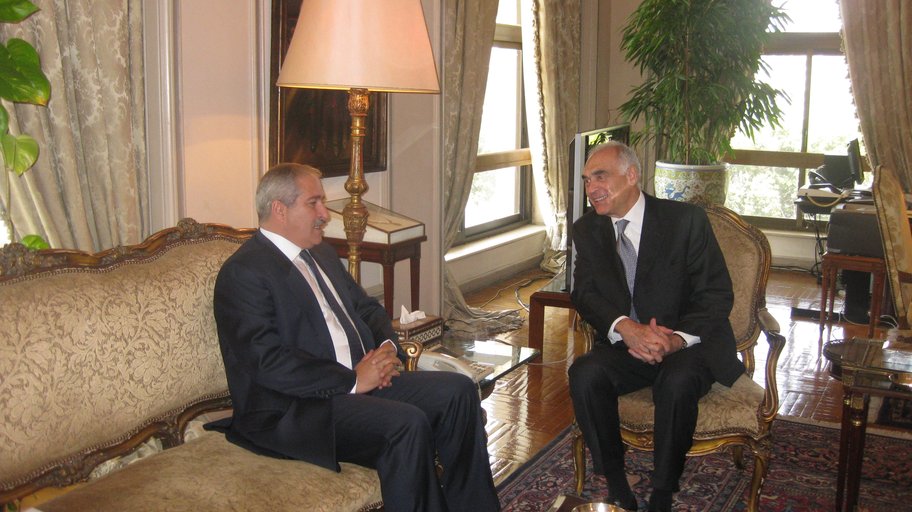 Jordanian Foreign Minister Nasser Gouda held discussions with President Mohamed Morsy on Wednesday about the ongoing Syrian conflict and the possible role Egypt could play in aiding Jordan with the pressing needs of the ballooning refugee population.

Gouda arrived on a special visit to Cairo on Wednesday, where he met with both President Morsy and Egyptian Foreign Minister Mohamed Amr to discuss the burgeoning Syrian crisis.

Amr discussed possibilities of humanitarian aid to Jordan in order to support the Syrian refugees, which resulted in Egypt agreeing to review a list of pressing humanitarian needs to determine how best to serve the refugees. Jordan hosts an average of 70,000 to 80,000 registered Syrian refugees, according to a Ministry of Foreign Affairs press release.

Amr praised Jordan’s hosting of tens of thousands of Syrian refugees fleeing the ongoing violence in their country. Jordan has long struggled with hosting Arab refugees, being home to the largest Palestinian community.

The meeting followed with a visit to the presidential palace in order to meet with President Morsy, in Amr’s presence. The meeting witnessed discussions about the current situation in the region, as well as strengthening the Egyptian-Jordanian relations, according to state-owned MENA news agency.

According to the Associated Press, Gouda also delivered a message from Saudi King Abdullah II. It was unclear what the message the king wanted delivered to President Morsy.

Several bilateral ties have held Egypt and Jordan together.

Egypt exports a lot of natural gas to Jordan, which has been effected by the continuous sabotaging and bombing of the main natural gas delivery pipeline since the January 2011 uprising. The latest bombing occurred on Sunday morning, marking the 15th bombing in almost 19 months.