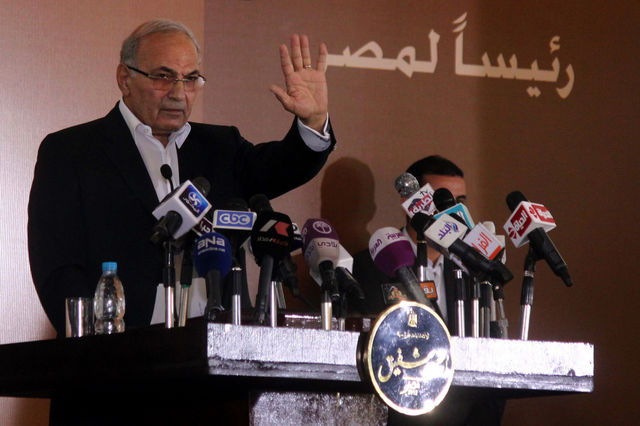 Just after the presidential elections’ results were out, Mubarak’s last prime minister, former minister of aviation and ex-presidential candidate Ahmed Shafiq was nowhere to be found.

Numerous media outlets said Shafiq flew to Abu-Dhabi for a vacation with two of his three daughters and his three grandsons before he headed to Saudi Arabia for omrah (lesser pilgrimage).

Shafiq’s departure coincided with the commencement of investigations accusing him of wasting public funds and facilitating selling lands to Alaa and Gamal Mubarak, the two sons of the ousted president. These allegations were denied by Shafiq repeatedly during the elections.

Despite the denials, Shafiq is still facing 35 corruption cases, which were originally handled by a military court and later transferred to the general attorney. Shafiq is also a witness in the controversial trial of the Camel Battle. He has avoided testifying the case.

Shafiq added that Sulieman was the one who advised him to leave Egypt and if he were alive he would have told him not to come.
On 23 July, Shafiq talked to Lamis el Hadidi, a prominent show host, on air and said that he is away because he has business to do and that he has nothing to run or hide from.

He expressed his concern over the situation in Egypt and advised President Mohamed Morsy to choose the right people for the right positions regardless of their political affiliations. Shafiq did not specify when and whether he was coming back.

He was supposed to come back to Cairo after performing the Islamic rite of omrah to establish a political movement that would unite the 13 million who gave him their votes in the presidential elections.

“These people only have in common their love and concern for Egypt, they are the 13 million who supported the wave that could have changed Egypt,” Shafiq told el Hadidy on the phone.

Tarek Kadry, a Shafiq supporter, said Shafiq was in Dubai and that he didn’t intend to start a movement or a political party not to divide the Egyptian people.

“He said if we wanted a political party or a movement he will support us,” Kadry, who voted for Shafiq in both rounds of elections, said. “We’re protesting in Manassa now against the influence of the Muslim Brotherhood over the authority in Egypt”

“We want Shafiq back with us, but we’re worried about his safety. There are people who want him dead,” Kadry added.

There are rumors circulating that Shafiq is working in Dubai as a counselor for the Ruler of Dubai and that he is subject to assassination because of the secrets he was told by Omar Suleiman before his death.