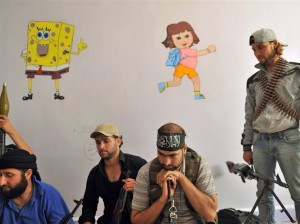 The United States government is allowing US citizens to give funds freely to the Syrian Support Group, an organization less than four blocks north from the White House, who has openly stated that those funds will be given directly to the Free Syrian Army and to “work closely with FSA personnel on the ground including generals and civilian armed groups to help in organizing their structures and coordinating among each other.”

It is a prospect that appears encouraging to those who have been lobbying against restrictions on money originating from inside the US transferred through charities or organizations that operate outside of America. The aim of the restrictions that began to tighten as a result of the USA PATRIOT Act [Uniting (and) Strengthening America (by) Providing Appropriate Tools Required (to) Intercept (and) Obstruct Terrorism] in 2001 were to prevent funds from reaching militant organizations through charities set up among the diaspora communities living in the US.

Legitimate charities hoping to send support to displacement camps in Iraq, or support groups for widows of the war in Afghanistan have struggled to get clearance, which is why the clear roads for the Syrian Support Group are so perplexing.

This past May, Kind Hearts for Charitable Human Development (KindHearts), a US-based humanitarian relief organization that provided aid to families affected by the wars in Iraq and Afghanistan, was awarded over $300,000 for losses suffered after it was shut down in 2006 under the provisions of the PATRIOT Act including having its assets frozen. In 2009 a judge ruled that the suspicion that KindHearts was supporting any terror groups was so tenuous that the freeze was overturned and the charity was awarded compensation.

The strange deference given to the Free Syrian Army is further strained by the images that have emerged showing FSA fighters detaining and then killing Syrian soldiers while they were already disarmed. The Syrian Kurds who captured the border with Iraq were reported to have cut the limbs off of soldiers to prevent them from fighting again and then killing them afterward.

A video posted on YouTube yesterday under the handle ‘UnionofAleppo’ apparently depicts the aftermath of a conflict between Syrian police forces and Free Syrian Army fighters. The bodies of three police officers are displayed in the video, stripped of their riot gear, on the side of the road near their vehicles.

The fog of war may be making the Free Syrian Army do strange things. The British Channel 4 journalist Alex Thompson reported being led into an ambush by Syrian rebels in what he perceived as an attempt to generate international pressure by having the Syrian forces kill him and his crew.

“Dead journos are bad for Damascus,” he said, a reflection of the media attention garnered by the death of senior journalist Marie Colvin and her photographer Remi Ochlik.

It is a valid position that in the bloody crisis that has been the last 16 months in Syria, the rebels are not in a position to debate the finer points of ethical war-time conduct. The Syrian Support Group justifies their support of an irregular armed group by stating on their website, “Allowing Assad to continue his crimes will force us to exhaust our resources and energy only gathering humanitarian and relief aids.”

The Syrian Support could be reached, but not for comment.

The reports of conduct and misconduct are difficult to verify as so few images are coming from syndicated agencies, yet the same sources provide the videos that have mobilized international condemnation of the Al-Assad regime’s brutality.

It would not be the first time in the Syrian conflict that the appearance of a double standard has emerged on the part of the West.

Last week’s attack on the National Security headquarters in Damascus that allegedly left four high ranking officials in Al-Assad’s government dead has been regarded as an illustration of the fine line between the acceptable use of force and terrorism.

Much of western media and several political officials showed deference to the rebels for the attack. US Secretary of State Hillary Clinton spoke about the events as a military offensive, expressing her belief that the conflict was drawing to a close.

“It’s important to look at these day-after issues,” she said. She advised the opposition to “set up humanitarian response efforts that we can also support. They’ve got to safeguard the chemical and biological weapons that we know the Syrian regime has, and so there’s a lot to be done.”

Russia’s Foreign Minister Sergei Lavrov has expressed his outrage at the US for what he perceives as “supporting terrorism.” Condemning the lack of response he told reporters on Wednesday, “this is quite an awful position, I cannot even find the words to make clear how we feel.”

He added, “This is directly justifying terrorism. How can this be understood?”

Lavrov criticised US Ambassador to the United Nations Susan Rice, saying she had argued that the attacks in Damascus meant the UN Security Council had to agree on a sanctions resolution against Syria. Russia later vetoed the resolution.

“In other words, to say it in plain Russian, this means ‘we (the United States) will continue to support such terrorist acts for as long as the UN Security Council has not done what we want,'” Lavrov said grimly.

But the condemnation is more serious than just judgment, the Russians have used the double standard to block progress in the Security Council since the uprising first began, demanding that language against the hostilities include condemnation of the Free Syrian Army.

Without recognising the double standard, the West continues to be vulnerable to criticism from Russia and Iran backing Al-Assad in negotiations for a successful and peaceful transfer of power. Iran reaffirmed today their commitment to stand by their ally saying “Tehran is ready to give its experience and capabilities to its friend and brother nation Syria.”

On Thursday, AFP’s Bulent Kilic published photographs from the fighting in Aleppo that showed Syrian rebels taking over a police station in the Shaar district. The men were handcuffed and sitting on the ground, but showed serious signs of injury and beating. Some had cotton stuffed into their ears to stop bleeding from beatings to the head. They were accused of being agents of Al-Assad’s regime.

What is clear is that if Al-Assad loses his last stronghold in Aleppo and is forced from his seat, the ensuing de-Baathification of all his former institutions will be bloody, to say the least.

The Free Syrian Army has so far failed to demonstrate the capacity to facilitate a peaceful transition should Al-Assad fall. The FSA has not inspired confidence in their ability to prevent the marginalisation of the Alawite minority, nor the safety of those affiliated with Al-Assad once his absence paves way for new rulers.