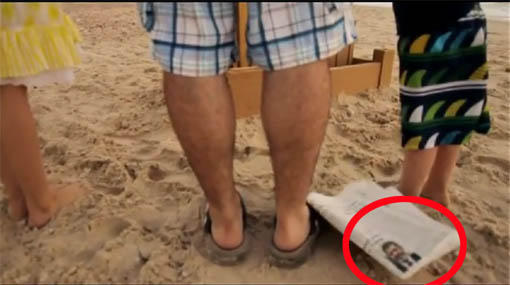 A controversial Israeli television commercial released by the Temple Foundation, urging the reconstruction of Solomon’s Temple came under fire by Egyptian media because it features a newspaper with the photo of Egyptian President Mohamed Morsy being thrown on the ground.

State-owned Al-Ahram reported on the commercial, citing it as an insult to President Morsy. Several commentators similarly jumped into the fray after the article was published stating that Morsy could not stop Israel from rebuilding the Solomon Temple.

According to the Israeli newspaper, Morsy’s picture appearing in the commercial was all but a coincidence. Yet, Egypt’s response validated that tensions were high between the two countries, the Israeli press noted.

Several Egyptian news organisations cited the president’s official spokesperson Yasser Aly stating that the president has assigned the Ministry of Foreign Affairs to reply to the Israeli commercial.

However, this could not be independently verified by the Daily News Egypt.

Mohamed Abul Dahab from the press office of the Ministry of Foreign Affairs said that the office had no knowledge whatsoever about the existence of the commercial or the president’s request to the ministry to resolve it. He said the office would look into it and release a statement should the search amount to anything.

Solomon’s Temple was built during the reign of the Prophet-King Solomon, according to religious texts. It had been destroyed in 70 AD and the Al-Aqsa mosque was built over parts of its debris.

Rebuilding the temple means that the Al-Aqsa holy mosque would be destroyed if it were rebuilt.