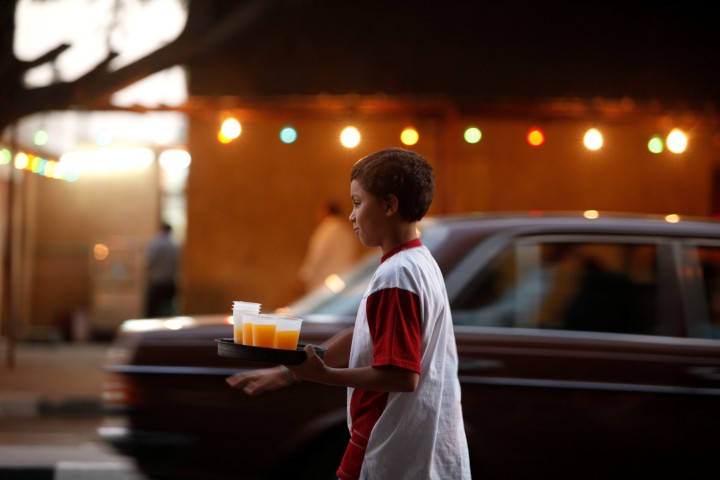 I spoke with Hala, head of Dar El Abrar El Seghar choir, less than half an hour before her girls were set to perform. Miss Hala was backstage at El Sawy Culture Wheel on Tuesday night draped in teal and silver jewellery. Around her scurried a handful of girls, around ten years old, grinning with closed mouths but not saying anything.

“Where do the girls come from?” I asked. Miss Hala paused to think the question over after it was translated for her. As she did, one of the girls behind her said, “Masr.” They all broke out in fits of giggles.

“They come from all over,” is what Miss Hala settled for. See, the girls who were performing Tuesday night are from the Dar El Abrar El Seghar orphanage. Miss Hala explained to me they will stay with her until they are married.

Seated in the audience, I noticed that the girls looked comfortable on stage. Nine skinny girls behind six skinny mic stands, the girls wore tangerine jumpsuits with aqua shawls and aqua sandals. And they looked healthy. Those who were not wearing hijab had thick black hair, combed past their shoulders. They rocked on the balls of their feet and whispered to each other between songs.

The girls sang about Egypt and religion. They were accompanied by a man on keyboard wearing a cream suit and dark shades. The electronic backdrop could have run the risk of betraying the mood, but when the girls sang in harmony, it was nothing short of haunting. Their songs were simple, but delivered flawlessly.

“Are you performing for Ramadan?” I asked Miss Hala. “No,” she said, “we perform all year long, this is our second time at Sawy.”

Ramadan is a month when Egyptians reflect on their lives and give special attention to charity. Some live this way all year long.