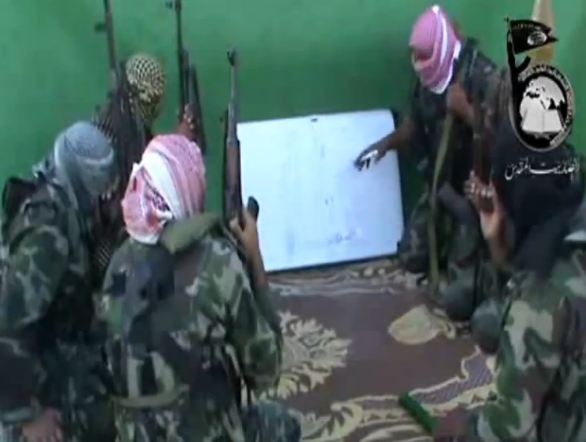 Ansar Beit Al-Maqdis, or “Supporters of Jerusalem,” claimed responsibility for the Sunday attack on the Egyptian-Israeli gas pipeline.

“We bombed the gas stations and pipelines taking gas to the Zionist entity,” said a member of the group in video posted on YouTube. The man was wearing camouflage and his face was blurred as he spoke into the camera. “The only reason we did this was to protect the resources and protect the rights of the faithful.”

The video documented the group’s bombing of the pipeline. The video showed the keffiyeh-swaddled men sketching out their plan on a dry-erase board. A night-vision camera then shows someone digging in the sand and uncovering what appears to be the pipeline itself, then taking a bomb out of a backpack and wiring it to a remote device. The footage then changes to a new point-of-view that mostly shows blackness before a streak of fire breaks the darkness, presumably as the militants videotaped the detonation of the explosive device.

The group called the supply of gas to Israel “treason.” They said it was a crime committed by the Mubarak regime and one that is being continued by the Supreme Council of Armed Forces (SCAF) today. The attack is the first since gas deliveries to Israel were cancelled in the spring. However, the Supporters of Jerusalem claim that the cancellation was merely a political trick.