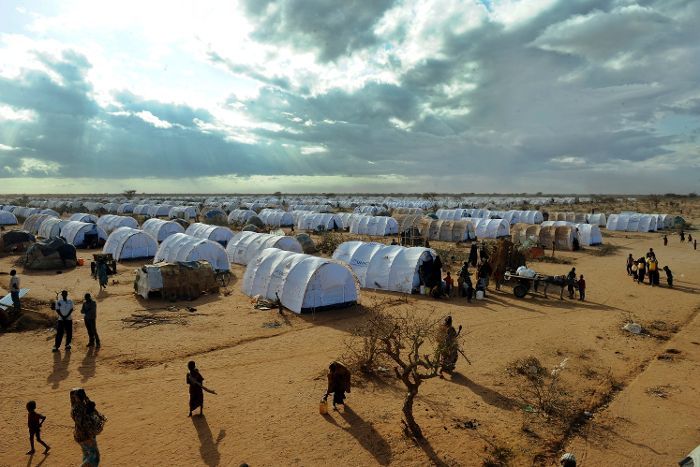 A bomb injured six people on Wednesday after it exploded inside of the Dadaab refugee camp in Kenya, according to the Kenyan Red Cross. The bombing came at a site for food distribution in the mega-camp, which house more than 450,000 people, and has the distinction of being the largest refugee camp in the world. The camp is designed to hold only 90,000 refugees.

On Wednesday, rapid-response teams from the Kenyan Red Cross stabilized victims at the scene and rushed all six to hospitals.

The attack comes after an attack earlier in July in Garissa Town, which lies on the road from Dadaab to the Kenyan capital of Nairobi. In the Garissa incident, attackers threw two grenades into a church, killing 17. At Dadaab in May, a suicide bomber draped in female robes set off an explosion that killed three people. The refugees refused to assist in the investigation, according to the news portal Somalia Report.

Wednesday’s explosions were the most recent turn of events in a destabilized region where Kenyan territory meets Somalia. In Somalia, international forces continue to fight Al-Shabaab, an Al-Qaeda-linked militant group inside of Somalia. The fighting comes as a severe drought has ravaged the region. Both the violence and the dourght have sent masses of Somalis pouring across the border into Kenya.

The Kenyan newspaper the Daily Nation reported a pending offensive from the African Union Mission in Somalia (Amisom) against Al-Shabaab. Plans were drawn up over the weekend on how to retake Kismayo in southern Somalia, the newspaper reported. Kismayo is a shipping hub on the Indian Ocean, where Al-Shabaab has maintained a tight grip, allegedly not letting citizens to enter or leave. Kenya, Uganda, Burundi, Ethiopia and Djibouti are planning a joint attack, in tandem with government allied militias in Somalia, to take back the town.