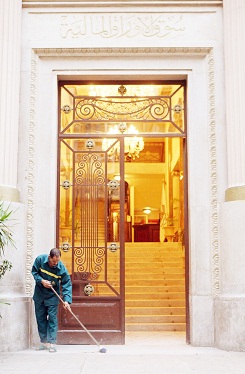 Orascom Telecom Media and Technology (OTMT) played an important role in maintaining the value of trading in the first week of Ramadan at a time when analysts expected the market to fall.

Most leading stocks were subject to selling pressures that coincided with a lack of clarity on the political front. Hermes stocks fell 3% to close at EGP 10.75 per share after the Egyptian Financial Supervisory Authority disallowed Keo from acquiring a 60% share in the company.

The value of trading was EGP 2 billion with 778 million shares exchanged in 65,000 trades. Total market capital was EGP 333.64billion.

Mohamed Al-Aasar, director of the technical analysis division of Sigma Capital, said that the market continued trading between 4,720 and 4,800 points last week. He predicted that the market would rise towards 4,830 points at the beginning of next week and then fall to test the support level at 4,550 points with the value of trading to equal approximately EGP 300million.

He predicted that most stocks would see a rise in today’s session. He expected Orascom Construction Industries to hit EGP 243 per share with Orascom Telecom Holding to reach EGP 3.3 per share before falling to EGP 3.05. He added that the Egyptian Kuwaiti Holding Company will rise by1.23% per share before falling to $1.14. In addition, he predicted that Pioneers Holding Company shares would rise to EGP 4.15 per share until profit taking lowers the price to EGP 3.85. Talaat Moustafais will rise EGP 4.05 before sinking to EGP 3.7.

Al-Aasar added that the EGX70 index will test the 435 point level during today and tomorrow’s sessions.

Essam Khalifa, Managing Director of Al-Ahly Funds of the NCB, said that the unstable political environment, protests, disturbances, and the more than 15 attacks on gas lines in Egypt are having a significant influence on the EGX. Despite the setbacks, the EGX30 has led all emerging markets in terms of growth since the beginning of the current year. The EGX70 has, however, fallen.

Khalifa said that the EGX recorded a significant increase in the first quarter of the current year before falling in the second quarter. The third quarter has thus far witnessed a number of oscillations, reflecting the uncertainty of the political environment. The market is not expected to grow steadily until the formation of a new government and a new parliament is elected.

The prevailing trend in last week’s trading was selling pressure, with net sales of foreigners totalling EGP 249.3million, accounting for 22.6% of market transactions.