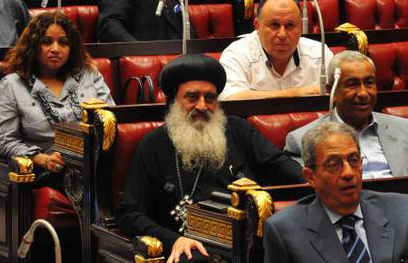 Abasseya’s St. Mark’s Cathedral was the site of a demonstration on Friday against what the protesters see as the Islamisation of Egypt’s new constitution.

“The purpose of the demonstration is to put pressure on the Church leadership to withdraw from the Constituent Assembly because the Muslim Brotherhood and Salafi groups are turning this into a religious constitution,” said Hani Abdallah, a member of the legal committee within the Maspero Youth Union, a political movement created to defend the rights of Egyptian Copts.

One of the most pressing issues to the Coptic group is the attempt by some in the Constituent Assembly to change the text of Article II. Currently the article states that law in Egypt is based on the “principles” of Sharia. Some Islamic groups are seeking to make the text read simply that law is Sharia.

The Maspero Youth Union is not the only group demanding a halt to the increasing religious nature of the writing of the constitution. Egyptians Against Religious Discrimination (MARED) issued a statement calling for a secular, civil state. Their signatories include the Maspero Youth Union, Coptic groups from outside Egypt, many human rights NGOs, and also a Baha’i group.

The Baha’i presence points to an additional complaint with the Constituent Assembly, which is the fact that the assurance of religious freedom may be defined as freedom for Christians and Jews, leaving many other religions, and potentially divergent forms of Islam, left outside the law.

“The stipulation ‘sovereignty is for God’ in the draft constitution to replace the current ‘sovereignty is for the people,’ the statement declares, plays on religious sentiment,” added another member of the Maspero Youth Union. “It takes Egypt back to the Middle Ages, shatters the basis of a modern state, legalises theocracy, and opens the door for countless legal problems, let alone blackmail by opportunists who feign religiosity.”

The demonstration in Abbaseya was held the same day Associated Press reported tit-for-tat violence south of Cairo between Muslims and Christians. The feud in the village of Dashour started after a Christian makwagi (launderer) burnt the shirt of a Muslim client.

The spat resulted in arrests, but no fatalities

The Coptic community in Egypt has been nervous since the election of the Muslim Brotherhood’s Mohammed Morsy as president last month. The action within the Constituent Assembly has only served to reinforce their fears.

“Part of the problem is still the same: the committee is not representative of the political, social, and so on, groups of the country,” said Ali El-Samman, the president of the International Union for Inter-Cultural and Inter-Religious Dialogue. “The groups who are on the inside don’t represent the Egyptian people,” he added.

Asked if the Coptic representatives would leave the Assembly, Dr. El-Samman said, “I think everyone is awaiting the outcome of the court’s judgement.”

The proceeding are set to continue on 30 July when the Administrative Judiciary Court is set to look at a case calling for the dissolution of the assembly.

Muslim Brotherhood lawyers have called for a change of judges, however, citing a conflict on interest since the same bench had dissolved an earlier assembly.

On Monday, the court will look at the lawyers’ petition and if rejected, might actually make the ruling on that same day.