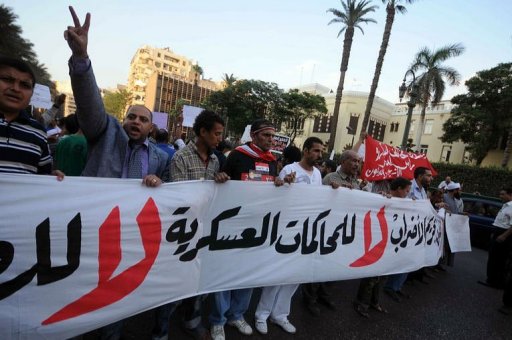 A paramedic affiliated with the No Military Trials for Civilians movement was found in an Al-Azbakeya hospital on Saturday night, a day after he was kidnapped at dawn by unknown assailants he believes are Egyptian general intelligence agents.

Anas Al-Assal woke up after more than 24-hours of interrogation, abuse and drugging in Al-Helal Hospital with only faint recollection of his abduction at the hands of men he described as general intelligence agents who injected him with drugs and beat him. Anas will be filing several lawsuits against all of the intelligence gathering bodies in Egypt in response to the kidnapping.

“It is general intelligence who abducted me,” Anas, a paramedic, told the Daily News Egypt before undergoing tests at the hospital. Anas was released by his abductors Saturday evening, and is currently undergoing tests at a hospital for injuries sustained during the kidnapping.

Anas’ father, Ahmad Al-Assal said Anas had mutiple injuries to his head, arms, face and chest, following his abduction. “The Tramadol is making him delirious and its causing blurry vision and memory loss, he almost has amnesia.”

Anas was taken from his home at dawn on Friday as he was speaking with a colleague on the phone.  After eating with his family, Anas decided to go to his family’s other apartment – two blocks away from the apartment where the family resides.

According to the friend with whom Anas was speaking on the phone at the time, the doorbell rang once. Anas opened it to find nobody outside. It rang again and the second time the friend on the phone heard two bangs. Then Anas screamed and the line went dead.

“I opened the door to find a huge man beating me and spraying me with something which had me lose consciousness right away,” Anas said as he recalled the details of his abduction.

His father said Anas was abducted in a red truck, belonging to one of their neighbours. His abductors later moved him to a different car, before reaching their destination.

According to Anas, he woke up to find himself in a cell, hand-cuffed and hallucinating. He could see marks in his arm indicating that he had four injections shot into his arm.

“I screamed at them, questioning them about what they had injected into me, only to find some man entering the cell to beat me up. I vomited blood from the blows,” he said.
Afterward, the questioning began.

“I remember them asking me two questions: what my activities and interests are, and whether I plan on going to Syria like I had gone to Libya. I do not remember replying to any of their questions,” he said.

Anas travelled to Libya during its uprising in 2011, where he was one of the first Egyptians to set up a makeshift hospital there.

“A nurse from the hospital called to tell us that Anas had been through an accident and that he was now with them,” His father said.

After running some tests and X-rays, Anas and his family received his medical report and took it to Al-Azbakeya police station in order to document the case. Yet, the officers there refused to do so.

In turn, Anas’ lawyers moved him to Al-Qasr Al-Eini Hospital, where he is to remain – for 24 hours – in the Toxicology Centre.

Anas will file a lawsuit against his abductors once his verdict is out, his father said.

“The suit is to be filed against all organisations responsible for such abduction cases,” Anas said, and will include all of the intelligence bodies of the state, like state security, and general and military intelligence. Anas said he knew he was abducted by and held in general intelligence, by the treatment and the type of cell he was kept in.

Anas is a paramedic, who had continuously helped in makeshift hospitals until he was injured in May during the Abasseya clashes. He is now facing a military trial for complicity in the clashes. He spoke out against the military trial system at more than one press conference for the No Military Trials for Civilians movement.

Alongside Anas, Ahmad Ibrahim Saeed, a member of the No Military Trials for Civilians movement, was also snatched by unknown assailants after he received an anonymous phone call about a clash with military police in Mansoureya.

Separated by hours, the two kidnappings, linked by their connection to the No Military Trials movement, have left the victims’ families suspicious as to the timing of the abductions as well as to who is behind them.

“We condemn all kinds of intimidation and use of violence against citizens and rights activists,” Shahira Abouallail, one of the founders of the No Military Trials movement, said in response to the latest kidnappings.