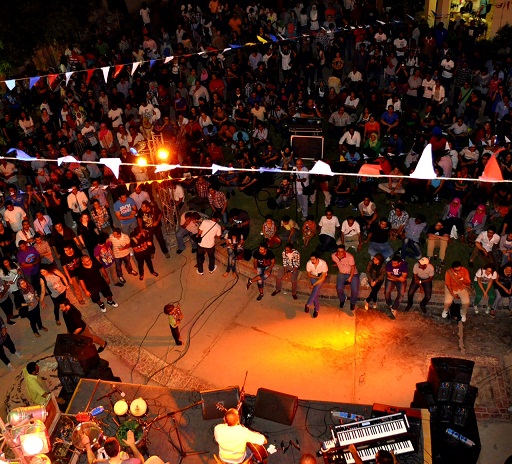 This past Thursday the Mawaweel 2012 Festival kicked off in contemporary arts and culture centre Darb 1718 in Old Cairo. The festival is underway for the second time after its introduction in 2010. “Cairo’s alternative Ramadan experience” provides Ramadan entertainment through a wide range of music, performances, art, food and interactive crafts.

Mawaweel continues during the next two Thursday evenings of Ramadan. “We aim to provide the people who come with an alternative and real Ramadan experience,” said Reem Hatem, PR & Communications Manager at Darb 1718. “This is a great alternative to staying at home and watching TV all night.”

The Cairo Jazz Club Agency, the organisation responsible for facilitating and booking live music events, works closely with Darb 1718 to provide a great experience with some of Egypt’s hottest local musical talent. On Thursday the Alexandrian rock and blues band Massar Egbari performed an excellent set to scores of people surrounding the stage and singing along. “Tonight we were expecting around 1,000 people to show up,” said Cairo Jazz Club Marketing Manager Sara El-Redy. However at this point, the number of people dancing and singing to Massar Egbari’s tunes far exceeded that estimate.

Mawaweel’s wide range of cultural performances also include theatrical performances, storytelling, and craft workshops. The notable exhibition ‘Enough’ confronts the issue of sexual harassment through multiple forms of art. The exhibition came to Darb 1718 in June and will remain open to visitors until the end of August.

A bazaar lines the entrance of the festival, full of tables selling anything from local art, jewelry to pottery. Those inclined to make their own pottery can do so at a pottery wheel and there is the opportunity to paint the creations.

A section of the space is set aside for those hungry after a long day of fasting. Mawaweel offers a wide range of food and refreshments including traditional grilled food, foul, and dessert.

The Mawaweel Festival is an excellent opportunity to take friends and family to an event that focuses on the unity and festive atmosphere that is so central to the month of Ramadan. The festival provides a chance for people to absorb, appreciate and participate in various forms of creativity.

Darb 1718 and the Cairo Jazz Club Agency have accomplished the difficult feat of creating an event that engages children and adults of all ages.