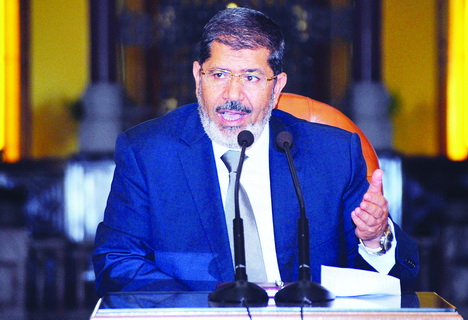 Prime Minister Hesham Qandil said on Saturday that the final cabinet formation would be presented to the public in a press conference next Thursday.

Qandil met with President Mohamed Morsy in the presidential palace earlier on Saturday and discussed his candidates for each position. State news agency MENA reported that Qandil had already picked 19 ministers out of about 30.

The Prime Minister has been meeting with several candidates for the different ministries over the past few days, including some ministers from outgoing Prime Minister Kamal El-Ganzouri’s cabinet.

Qandil confirmed that Minister of Scientific Research Nadia Zakhary in the El-Ganzouri cabinet would retain her post. He also met with Tourism Minister, Mounir Fakhry Abdel Nour, who has since announced he would not continue in his post.

Reports in the Egyptian press suggested that the Electricity, Agriculture, Scientific Research, Planning and International Cooperation, and Tourism ministers in the El-Ganzouri cabinet would all carry on in Qandil’s.

Abdel Nour has indeed been offered to carry on but rejected the post. Abdel Nour is a member of the Wafd Party which announced it would not take part in the new cabinet. Qandil asked him to instead recommend a successor.

Salafist Islamic scholar Mohamed Yousry Ibrahim, who ran for parliament last year and lost said he was offered the post of Religious Endowments Minister and that he has accepted it.

Reports have cited that the delay in the cabinet’s final announcement came over disagreements between President Morsy and the Supreme Council of the Armed Forces over so-called “sovereign” ministries of the Interior, Defence, Finance and Foreign Affairs.

Official Presidential Spokesperson Yasser Aly denied in a statement on Thursday that the military had rejected Morsy’s candidate for the post of Minister of Defence in the new cabinet. Aly denied that Morsy nominated former Major General Abbas Mekhemar to the post and said that the final cabinet formation would be announced mid next week.

One candidate Qandil met with, Mohamed Hazem, a professor of electronic engineering at Cairo University and senior FJP member, is understood to be a candidate for the post of Communications and Information Technology Minister.

Tarek Wafik, an urban planning professor at Cairo University is also an FJP member. He is also member of the party’s high board. Wafik is nominated to take on the Ministry of Housing, Utilities and Urban Planning.

The Prime Minister also met with Mostafa Mosaad, who served as a member of Morsy’s presidential campaign. Mosaad is a candidate for the Ministry of Education.

Other candidates Qandil met on Wednesday include Atef Radwan, the Dean of Medicine at Zagazig University, who is a candidate for Minister of Health, and Hatem Abdel-Latif, an arts professor who might take on the Ministry of Social Affairs.

Qandil denied that any ministries would be fused or cancelled and said that in fact he was looking to add new ministries such as one specifically for utilities and another for drinking water and sanitation.