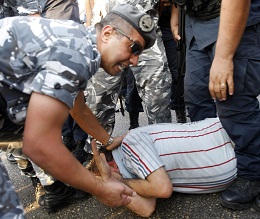 A small arms skirmish that broke out between inhabitants of two regions in Tripoli, Northern Lebanon were finally controlled by the Lebanese Army on Saturday at midday, according to state-run Lebanese news agency, the National News Agency (NNA).

These clashes were between armed Sunni and Alawite factions in the regions of Jabal Mohsen and Bab al-Tabbaneh, according to the Lebanese news service, The Daily Star. The clashes began on Friday night and left at least 14 dead.

According to the Lebanese news service, Naharnet, the town of Bab al-Tabbaneh is primarily Sunni while Jabal Mohsen is predominantly made up of Alawites who support the Assad regime in Syria.

The shooting seemed initially to have been contained by the Lebanese army with no fatalities but at midnight the clashes recommenced and expanded to include a larger region.

According to The Daily Star, automatic rifles and rocket-propelled grenades were used in the fighting. The wounded include at least three army soldiers, said the NNA, but none have been reported dead yet.

The clashes continued until Saturday morning and only came to an end when the Lebanese army started firing back at the shooters. The Lebanese army said in a statement published on the NNA news site that the army moved in heavy patrols, creating barriers and raiding the houses of shooters. The army is looking for the shooters and creating reinforcements in order to restore normal order.

Villages in the Northern territory of Lebanon were repeatedly shelled from inside Syria earlier this month leaving several dead and prompting the Lebanese army to deploy more troops on the border with Syria.

Many in Syria have been forced to leave their homes following the violence that erupted in their hometowns when the Syrian Revolution started March last year. According to the Syrian Observatory for Human Rights, over 19,000 have died since the beginning of the revolution.

An anti-Assad protest was held in Lebanon on Friday in Tripoli in support of the Syrian Revolution, according to the Lebanese, NOW Lebanon.

According to CBS News, at least 20,000 Syrians have taken refuge in Tripoli alone. Estimates indicate that the number of Syrian refugees in Lebanon totals 90,000.