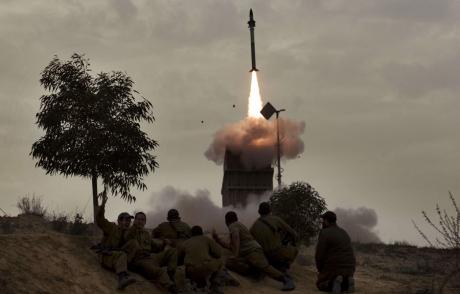 A new military aid package destined for Israel was announced on Friday by the US pledging another $70 million in support of the Israeli Iron Dome missile defense system. President Obama supported the decision by stressing the importance of the system in providing security and safety for Israeli citizens. The US’ support for Israel comes at a time when tensions with Iran are on the rise with threats and accusations issuing from both sides.

As Obama signed the United States-Israeli Enhanced Security Cooperation Act he told reporters at the Oval Office that he believed “this is a program that has been critical in terms of providing security and safety for Israeli families. It is a program that has been tested and has prevented missile strikes inside of Israel … We’re going to be able to lock in that funding to assure that the program continues and that we are standing by our friends in Israel when it comes to these kinds of attacks.”

“What this legislation does is bring together all the outstanding cooperation that we have seen really at an unprecedented level between our two countries to underscore our unshakable commitment to Israel’s security,” Obama explained. Iran wasn’t mentioned as being the possible reason for the need of heightened security, but the rising tensions in the region speaks for itself.

The announcement came as his Republican challenger Mitt Romney was set to make his first overseas trip to Israel, the United Kingdom and Poland as a presidential candidate. Romney’s trip is considered to be a reflection of his foreign policy stance, a key issue in US politics. Romney regards Obama’s position on Israel and Iran as being too soft. Last week he addressed a war veterans group in Nevada saying that “The people of Israel deserve better than what they have received from the leader of the free world,” questioning Obama’s stance against Iran and their commitment to safeguard Israel.

Tensions between Iran on one hand and Israel and its allies on the other have been escalating for some time. Israel has beefed up security in the Golan Heights, a region which was once Syrian but was annexed by Israel after the signing of the Camp David Accords. The Israelis have been mobilising defensive forces within the area after Syrian troops briefly entered the demilitarised zone. As a long-standing ally of Syria, Iran’s commitment to stand by the Assad regime fuels speculation of an Iranian response, should Israel enter Syria.

From the Israeli front, Prime Minister Benjamin Netanyahu has publicly criticised Iran on several occasions. In March he stated that military threat was the only way to halt Tehran’s nuclear ambitions, and earlier this month Netanyahu also accused Iran of being behind the bomb-blast in Bulgaria which killed several people, including Israeli citizens, promising a “tough response” from Israel.

Netanyahu’s aggressive attitude towards Iran has drawn criticism from various political figures within Israel, including the former Israeli Security Agency Director, Yuval Diskin. Diskin said in April that Netanyahu’s decisions are based on messianic emotions, and that a strike on Iran could speed up their acquisition of nuclear weapons.

Israel’s military is small in comparison with the Iranian military but Israel has nuclear weapons. Iran’s pursuit of nuclear weapons and Israel’s mounting fear of a possible conflict engulfing the region, should foreign powers intervene in Syria, are reason enough for the US to increase Israeli defence funding. Should war erupt in the region, it is highly unlikely that the two rival states would openly engage in combat within their boundaries, rather, if attacks were to come from either nation, they would most likely be conducted through long-range warfare, making the Iron Dome defence system invaluable to Israel.