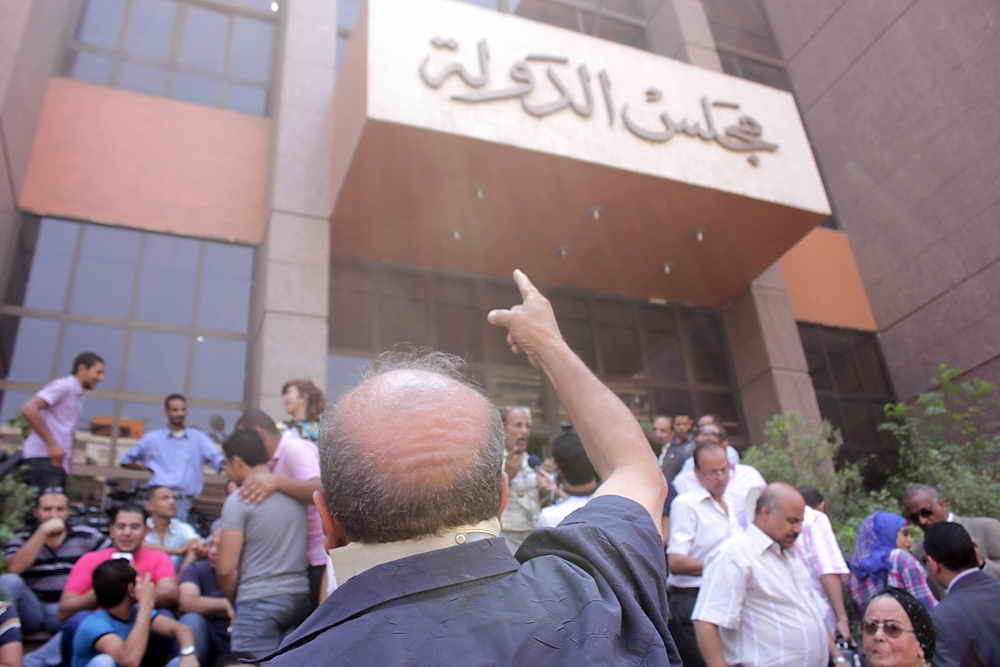 The Administrative Judiciary Court of the State Council ruled on Monday to postpone the case calling for the dissolution of the Constituent Assembly to September 24, giving the assembly enough time to complete the drafting of Egypt’s new constitution.

The court’s first district was set to rule on the case back on 19 July but Muslim Brotherhood lawyers filed a counter case demanding the case be transferred to another administrative judiciary district due to what they said was “bias” and a conflict of interest since the same district ruled to dissolve the first constituent assembly last April.

The second administrative judiciary district viewed the Brotherhood’s demand on Monday in a closed hearing and was meant to decide whether or not to transfer the case to another district or let the first district retain it.

Muslim Brotherhood lawyers filed a request for postponing that decision so that they may view case documents and present documents supporting their request for a different set of judges. The court granted their request and postponed ruling on the request until 24 September.

Constituent Assembly Official Spokesperson Waheed Abdel-Meguid said on Sunday that the assembly would finish drafting the constitution within 20 days and put it to referendum in September. Monday’s court ruling gives the assembly ample time to do just that.

“I hope the Constituent Assembly will now work on getting a proper and revolutionary constitution drafted as soon as possible but not rushing it due to the threat of court verdicts,” said April 6 Youth Movement activist Ahmed Said. He stressed that this was his own personal opinion and not the movement’s position, however.

Instead, opponents and critics of the group and President Morsy made up the majority of attendees in the session. The crowd awaited the verdict with anti-Morsy and Brotherhood chants such as “Down with the murshid’s [Brotherhood General Guide] rule” and became hysterical after hearing of the postponement, shouting “The people want to purify the judiciary.”

One particular woman showed very strong anti-Morsy sentiments. She arrived to the State Council building and immediately started shouting about how the president was selling out Egypt and how he stole the presidency. She also accused him of killing the late former intelligence chief Omar Suleiman.

Members of the press and media were all asked to leave by court officials and the police, although a few print journalists were able to convince officials to allow them into the court room. No one with a camera was allowed in, however.

The assembly is not quite home free yet, however. Stipulations in the constitutional decree the Supreme Council of the Armed Forces issued in June allow the council’s chairman, Field Marshal Hussein Tantawi, alongside the president, prime minister, a fifth of assembly members or any head of a judicial body the right to veto articles in the draft of the constitution.

The assembly then gets 15 days to discuss the veto and decides whether to uphold it or dismiss it. If it dismisses it then party issuing the veto has the right to refer the article to the Supreme Constitutional Court for a final, binding decision.

The Constituent Assembly has faced the threat of dissolution ever since its formation. The current assembly was formed after the Administrative Judiciary dissolved the first one for having members of parliament making up half the seats.
The March 2011 constitutional decree currently governing Egypt stipulates that both houses of parliament elect the membership of the assembly but does not say that parliamentarians may elect themselves.

The court ruled that parliament members had the right only to elect members of the assembly but not to have parliament represented in it.

Several lawyers filed a case against the assembly but the court initially postponed it until September, giving the assembly enough time to write the constitution and put it to referendum.

The plaintiffs filed a case against the postponement, however, and the court was meant to make its verdict on 19 June, before the Brotherhood lawyers petitioned for a change of judicial districts.

If the assembly is dissolved again, parliament will not get to elect a replacement. The Supreme Council of the Armed Forces will instead appoint a third assembly.

This is also a result of the supplementary constitutional decree SCAF in June. The decree was released after a Supreme Constitutional Court decision dissolving parliament’s lower house, the People’s Assembly.

The move was not entirely negative for the assembly, however. Constitutional Assembly members who were also PA members are no longer parliamentarians due to the chamber’s dissolution. Assembly members who sit in the upper house, the Shura Council, resigned their membership in the assembly in order to offer more legal protection against the court case, although with Monday’s postponement, it may not even come to that.