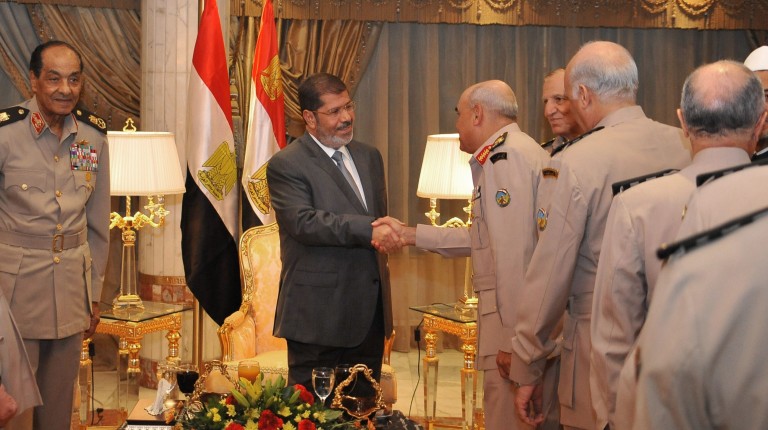 The System of Governance Committee of the Constituent Assembly finalised on Monday discussions on presidential powers and the relationship between the executive and legislative branches in Egypt’s new constitution.

The committee agreed that in the case of absence due to death, permanent incapacity, resignation or impeachment, the President would be replaced by the Vice President as acting president for 90 days before new elections are held.

In the case of resignation, the President tenders his resignation to the lower house of parliament, the People’s Assembly, which in turn informs the Supreme Electoral Commission (a new body the constitution will create) of the vacancy.

The President will be both the Supreme Commander of the Armed Forces and the Chairman of the National Security Council. He would also get to determine the general foreign policy of the state and declare war after obtaining the approval of the People’s Assembly. The president is barred from sending troops abroad without the assembly’s approval.

As such, the President will have the power to directly hire both the Foreign Minister and the Minister of Defence, with the latter also serving as Commander-in-Chief of the Armed Forces.

The remaining members of the cabinet will instead be picked by the Prime Minister, whom the President will choose after consulting with the parties inside the People’s Assembly. The Prime Minister must be able to maintain the confidence of the People’s Assembly and as such will likely be the leader of the party or coalition with a majority of seats.

The committee also amended the President’s power to dissolve the People’s Assembly. The President would have to subject the matter to referendum and if the people vote to keep the assembly the President would then be obliged to resign in order to limit conflict between the executive and legislative branches.

These suggestions still have to be passed by the assembly at large, however, and are thus not final. The constitutional articles are clearly limiting presidential powers in relation to the ones former President Hosni Mubarak had.

The President would be unable to declare emergency law without first getting the cabinet’s approval and then having the People’s Assembly vote on the matter. In case of the assembly being dissolved, the Shura Council, parliament’s upper house, would be tasked with voting on it instead.

The President would be unable to renew the state of emergency after six months without subjecting the matter to a popular referendum.

The Senate would be immune from dissolution in order to ensure no legislative vacuum in case the People’s Assembly is dissolved.

There was a conflict in the committee that lead to Supreme Council of the Armed Forces representative Major General Mamdouh Shahin, the assistant defence minister for legal affairs, to walk out.

Shahin suggested that the articles relating to military judiciary and courts be placed in the judiciary section of the constitution while other members insisted on it being in the armed forces section.

The Independent and Oversight Bodies Committee agreed unanimously that Al-Azhar is to be granted complete independence in the new constitution.

The committee has not yet decided on where Al-Azhar’s independent budget would come from.