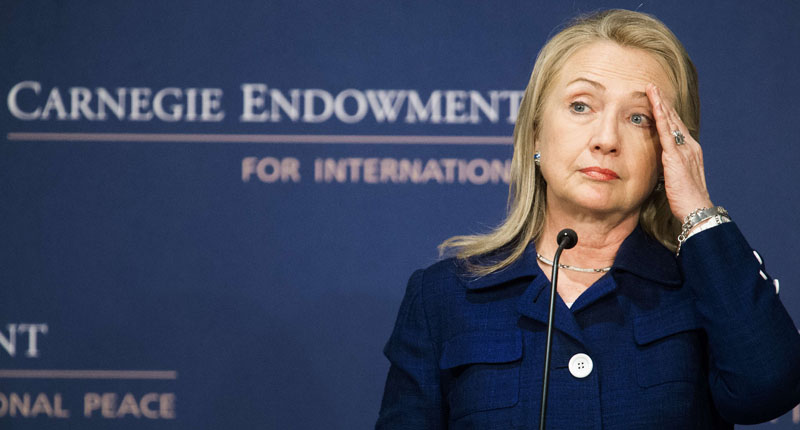 Arrests in Cairo of several people identified as being from religious minorities and the attempted passage of a blasphemy law in the constitution have prompted a rise in concern from the United States over religious freedom in Egypt since the ousting of former President Hosni Mubarak.

The United States Department of State is concerned with a rise in religious discrimination in Egypt in the wake of Islamist President Mohamed Morsy’s ascension to power and media reports of sectarian violence and discrimination, the US Secretary of State Hillary Clinton said on Monday at a meeting of the Carnegie endowment for international peace.

The comments came after the public prosecutor’s office in Sohag sentenced a teacher to four days of imprisonment pending investigation for reportedly insulting the Prophet Muhammad.

Mohamed Safwat, an agricultural engineer from the Salamon area in Sohag, filed a complaint against Beshoy Kameel Kamel El-Behery for undermining Islam and the Prophet Muhammad as well as insulting President Mohamed Morsy on his Facebook page. He also said that El-Behery offended him and his sister.

The Sada el Balad news website reported that El-Behery published animal drawings and wrote on them “this is God’s messenger.” During the investigation, El-Behery denied the charges. He admitted the page was his, but claimed it was hacked on Saturday.

El-Behery’s case has unfolded as the US State Department issued its annual report on religious freedom in which it expressed concerns at the situation of religious minorities in Arab countries, especially those transitioning after the Arab Spring.

“I am concerned that respect for religious freedom is quite tenuous in Egypt,” Clinton told the Carnegie audience. “Since 2011, and the fall of the Mubarak regime, sectarian violence has increased.”

The report referred to the authorities’ “failure to curb rising violence against Coptic Christians and its involvement in violent attacks, ” recalling an incident that the media dubbed “Maspero Massacre,” when Egyptian security forces attacked protesters in front of the state Radio and television building, leaving 25 dead and 350 injured, most of them Copts.

“To date, government officials have not been held accountable for their actions and there were indications in early 2012 of mounting Coptic emigration,” the report said.

Clinton said “that then sends a message to the minority community in particular, but to the larger community, that there’s not going to be any consequences.”

The report on religious freedoms also pointed out the noticeably increased use of anti-blasphemy laws in limiting the rights of expression of religious minorities.

During Mubarak’s era, Egypt’s Copts were the victims of numerous attacks. In the Nagaa Hammadi massacre of January 2010 seven people were killed, including one Muslim who was trying to defend Christians, and many more injured. A bombing of a church in Alexandria on 1 January 2011 killed at least 21 and injured 79. Later, it was claimed that the former Minister of the Interior, Habib El-Adly was involved.

Egyptian Shia similarly face discrimination. On Monday, the Misdemeanour Court of Appeals of Kafr el-Zayat sentenced Mohamed Asfour, an Egyptian Shia, to three years in prison with hard labour and a fine of EGP 100,000 for insulting the prophet’s companions and the desecration of a mosque.

These events come amid news of a proposal by Al-Azhar representatives at the Constituent Assembly to add a new article to the draft constitution prohibiting insulting god, Prophet Muhammad, Prophet Mohamed’s wives and Caliphs.