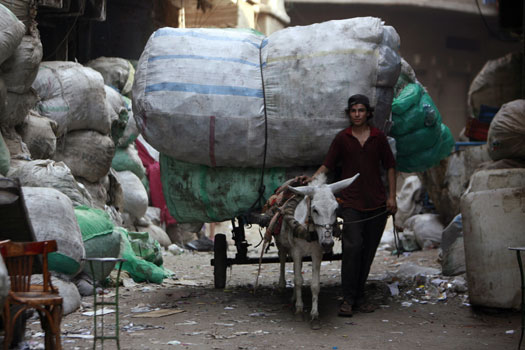 The firms are transporting much of the waste collected by volunteers and organisations, while the Zabaleen, well-versed in the collection and management of the waste are underutilised.

Aly declared “Clean Homeland” is “epic in the love for Egypt leading to a bright civilised Egypt, and its goal is to obtain a homeland clean of all corruption and neglect.”

The spokesman also claimed that 3,000 work groups from administrative and civil society and 107,000 volunteers worked to remove 120,000 tons of garbage in 22 governorates. The initiative called on citizens to participate in the cleaning of their streets in the face of the growing problems of accumulating trash in areas throughout Egypt, especially dense urban areas.

However, those familiar with garbage collection and waste management believe the campaign will falter because it does not utilise the manpower and experience of Cairo’s Zabaleen community.

“It’s a public relations campaign, not a practical and clear system with a clear solution,” said Ezzat Naem Gendy, Chairman of the Garbage Collector Syndicate in reference to the “Clean Homeland” initiative.

Gendy states that youth from his organisation participated in the cleaning of a street in Manshiyet Nasr, only to wait for Arab Contractors to come pick it up to take it to a dump site.

“Garbage collection is a public health issue,” said Dr. Laila Iskander, an education and development specialist and chairperson of CID Consulting, “it should not be carried out on a volunteer basis. No country operates like that.”

Iskander affirms that Egypt has the domestic resources to provide lasting and efficient solutions to Egypt’s garbage problem.

Yet larger foreign firms for waste management contracts have squeezed local collectors out, such as the Zabaleen community. The government has historically favoured larger contractors that cover larger areas. These collectors and the government collect the waste and put it in landfills located throughout the Cairo area. Landfills are located in areas such as Katameya, 15th of May City, and Madinet Al-Salam.

Experts like Iskander argue that the Zabaleen would offer many unique advantages if they and their estimated 10,000 trucks were granted official government contracts. They conduct their collections door-to-door, cutting down on the accumulated piles of waste and neglected overflowing dumpsters that have become a familiar sight throughout the city.

The community of informal garbage collectors is world-known for its efficiency in recycling, and separates organic waste from the inorganic. The organic waste is fed to animals, although the extermination of the Zabaleen’s pigs in April 2009 has created issues in the recycling of organic materials. Nevertheless much of the leftover organic waste is now transported to government-run compost plants. The inorganic waste is carefully sorted by material, colour and size and either used to create new goods within the community or sold as raw materials to stores, factories and exporters.

“Our vision is that Cairo is divided into different areas that are supervised by local collection companies,” said Gendy. This would allow for more focused efforts on meeting waste management needs for specific areas. Gendy maintains that localised efforts would also prevent the neglect that comes with the larger companies that tend to underperform.

Iskander estimates that at full capacity, the Zabaleen are capable of covering two thirds of Cairo’s waste. They have assembled themselves into 38 companies in an effort to vie for government contracts against larger organisations.

“The government has focused on the waste problem as a transfer issue, not a management one,” said Iskander.

Government contracts with current companies expire in 2015 although Gendy believes enough breaches in the contracts have occurred for them to be voided. Until then, his community will continue to work in parallel, collecting more waste than those under official government authorisation and implementing their unmatched 85 percent rate of recycling-a rate about four times higher than most Western garbage-collecting companies.