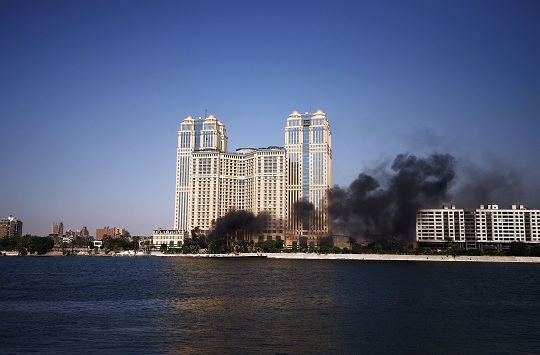 Violent clashes broke out at the Fairmont Nile City Towers in the Boulaq area near downtown Cairo today.

A man from Ramlet Boulaq, a poor district behind the Nile City Towers, was reportedly shot and killed by tourism police and another was injured.

People at the chaotic scene on Thursday told a Daily News Egypt reporter that the man had until recently provided informal security services for the towers.

He had shown up at the towers to demand salary that was reportedly owed to him and when personnel refused he became angry. At this point, the precise details of what happened to lead to his shooting and death are still unknown. A spokesperson for the Ministry of Interiors told the Daily News Egypt that he attacked personnel with light weapons.

Upon hearing of the shooting, his family and neighbours came to the towers and destroyed the glass doors at the front of the building. The interior and emergency doors to the towers were sealed off until Central Security forces arrived to disperse the crowd.

In the ensuing violence approximately ten cars were burned, as well as several motorcycles in the Nile City Tower’s parking lot.

Currently, no one can enter, and the angry citizens have made additional attempts to attack the building. Journalists attempting to ask questions of the crowd or take pictures reported having their phones and cameras confiscated and many were forced to leave.

The Boulaq area has experienced increased tension around issues related to the disparity between the enormous value of the land and the vast poverty of the people living on it.