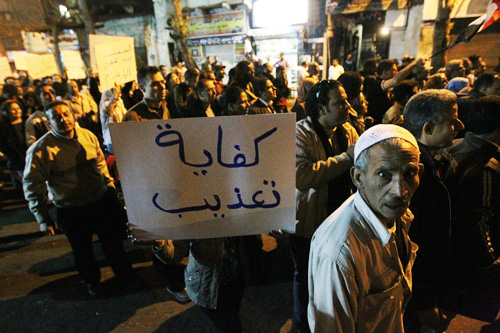 With more than a thousand still missing after Egypt’s uprising, a new group is searching for answers to abductions and kidnappings. “We Will Find Them” is focusing on finding the civilians missing since the onset of the 2011 uprising. The group held its first press conference describing their mission at the Press Syndicate on 4 August.

According to the movement, founded in February 2012, some individuals were abducted and released within hours while others remain abducted for months. The movement attempts to motivate the public in order to pressure what it describes as the “official authorities who are responsible for the abductions.”

Nermeen Yousry, one of the co-founders of the “We Will Find Them” movement, said that the focus of the movement is not only people who have went missing during the revolution but also includes people whose disappearance was related to the security forces and anyone randomly arrested.

“As people working from within the campaign, we can’t produce an accurate figure on the number of people who have gone missing,” she explained. “The number we have is from 2011 and was produced by Essam Sharaf’s Cabinet. It was 1200, but includes those who died and those who were tried by the military. We don’t know if the numbers have risen or fallen and there is no interest in the issue.”

“We Will Find Them” may be the first to focus on those missing but other movements such as the No Military Trials for Civilians (NMTC) are also focusing on civilian abduction.

“You don’t know who has arrested you and so you don’t know how pursue them,” she explained. “This is to scare activists and make them think a thousand times before they choose to join a march.”

Two people with connections to the NMTC movement were abducted last month: Anas al-Assal, a paramedic who once spoke at an NMTC conference and Ahmed Ibrahim Saeed, an activist with the movement. Assal and Saeed were kidnapped on the same day.

Bakry does not believe that the activists are picked up randomly.

“They are abducted for their connections to something specific, whether it’s an event that happened or a group or movement that they were involved with,” she said.

According to NMTC, those who get abducted are almost always subjected to physical and psychological abuse and are interrogated for hours if not days before they are released.

Bakry said that an accurate number of all of those who were abducted is very difficult to obtain because people who are abducted may not report it.

Three activists working with the NMTC have been abducted within the last year, said Bakry.

NMTC will hold a press conference on 6 August in order to bring attention to the abductions of activists, which according to a statement released by the movement, are increasing in number. The conference will be held at the Press Syndicate and entitled “Abduction: the Thuggery of the State.”