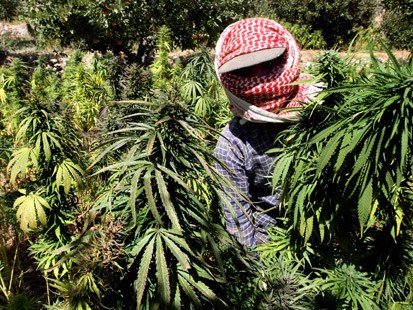 Protesters have taken to the streets in Lebanon, burning tyres and building roadblocks  in the eastern Bekaa Valley, state-run media reported on Saturday. The protesters are demanding the government recompense them for losses incurred by the destruction of the illegal crops.

The report by the National News Agency says the Saturday protest was joined by mayors from villages in the Yammouneh area outside Baalbek, about 50 kilometres northeast of Beirut.

Yammouneh Mayor Mohammad Shrif said the residents stood by the Lebanese Army and the police, stating that “we, the army, police and Islamic resistance [Hezbollah] form the bulwark of our nation.”

Protesters blamed the government for a lack of alternative occupations, leading many to turn to cannabis cultivation.

“In this regard we ask President Michel Sleiman what has become of the project to build the Yammouneh damn which would have helped residents in their livelihoods and created job opportunities?” Shrif told local Lebanese newspaper, The Daily Star.

Members of the Jaafar clan, one of the largest and most powerful families in the lawless Bekaa Valley, released a statement Sunday vowing to “confront with resolve the destruction of that plant, given that it is the only source of living in the area.”

They also added that they were joined by all of the families in the region against what they saw as an attempt to “starve the people.”

Towards the end of July resistance grew violent as farmers took up arms to defend their crops against what they see as the systematic destruction of their livelihoods. One policeman was lightly wounded and several tractors and other equipment used to destroy cannabis fields were attacked, and their operators warned not to collaborate with the initiative.

In a statement Wednesday, the director general of the ISF said the Central Drug Control Office, in collaboration with the judicial police and the army, succeeded in destroying several large cannabis fields throughout Lebanon.

The crop was eradicated under a United Nations programme between 1991 and 1993 but it has re-emerged as the security forces struggle to control the volatile country.

Attempts to convert cannabis growers to other crops have been unsuccessful as other crops are less profitable and less suited to the arid environment.