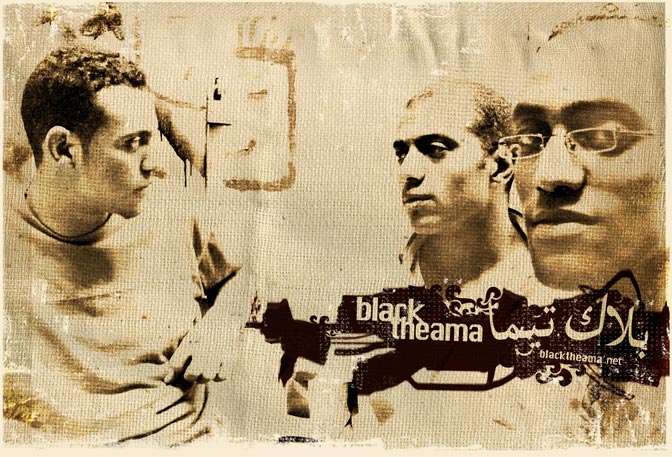 Clear the stage and ready the lights, draw the curtain and prepare for an Egyptian band unlike any other. The Opera House will be graced tonight by the Egyptian Reggae/Funk/Blues/Hip-Hop/RnB/Jazz/Nubian music group known as Black Theama, a collective of artists whose music touches on a wider variety of styles than any band should be privy to. Their music and themes cross various genres and social issues and is told through Egyptian slang, giving voice to the common man and his plight.

What makes Black Theama so interesting is that in its eight year history 15 artists have come and gone, meaning that the style of the group has not been linear save for the drummer Mahmoud Abdulaziz. Another aspect of the group, which adds to the multi-flavored music, is the fact that their lyrics are written by various different people at any point, creating a plethora of styles and lyrical prose that a normal band writing their own lyrics may not possess.

A good example is their songs ‘Hor’ which translates to ‘free.’ This song relies on the music as much as the video clip which was made for it, due to the extensive use of sign language. The sign language is used as an alternative to the words, based on the idea that words at times fail to reach the people. The imagery invoked is that they speak the language of the people, who are deaf to words. Another song, ‘Be happy’ uses Caribbean rhythm to create an island vibe intertwined with a traditional Egyptian style of singing.

The focus of their music is a search for the relationship that exists between “the music of the dark skinned in the world and to mix it in an easy way that allows normal street people to understand this music without any complication.”

Today’s performance marks the eighth anniversary of the group, and if their Facebook event page is anything to go by, a hefty crowd is surely expected to be present. For those who enjoy any of the genres listed above, the event promises to entertain, but if you do not speak Arabic you will be out of luck, unless you enjoy music without understanding the lyrics. Black Theama will be playing tonight at the Opera House at 9:30. For a cool 30 pounds you get to enjoy the music that sings with the voice of those who can likely and unfortunately not afford to attend.