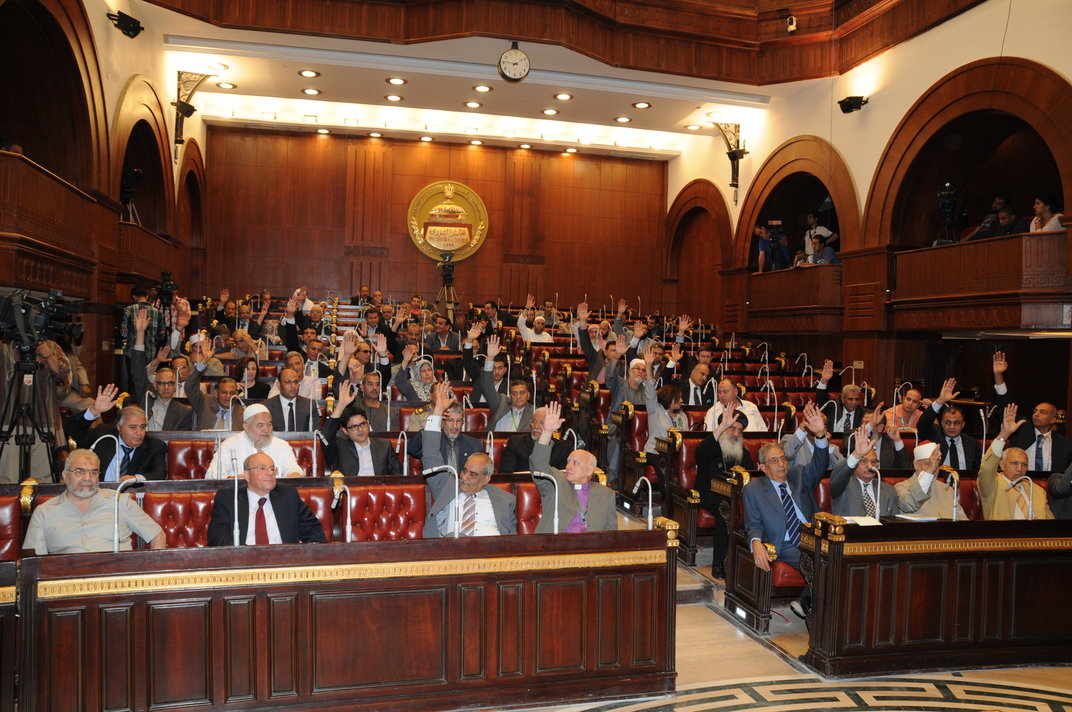 The Prime Minister will be independent from the President and will answer to Parliament, according to a committee drafting part of the new constitution.

The Constituent Assembly tasked with writing Egypt’s new constitution held its weekly meeting on Tuesday where it listened to specialised committee reports and discussed the time frame for completing the first stage of its work.

The System of Governance Committee representatives said they had finished discussing the executive and legislative branches and were now halfway done with the judiciary.

According to the report, the committee has decided on a semi-presidential system of governance with the President as head of state and the Prime Minister head of government.

The Prime Minister will be independent from the President and will instead be  required to maintain the confidence of Parliament. If parliament were to pass a motion of no confidence, the Prime Minister and the Government would be forced to resign.

Committee rapporteur Gamal Gibril said that although not explicitly mentioned, this would require the President to appoint the leader of the majority party or coalition leader as Prime Minister.

Regarding Parliament, the committee decided to change the names of both its houses. The People’s Assembly, or lower house, will be renamed to the House of Representatives while the upper house, the Shura Council, will now be called the Senate.

The House of Representatives will have legislative power, oversight of the Government, and will be tasked with approving the state budget. The Senate will assist in legislation, help with issues of local governance, and be tasked with appointing people to some of the top state posts alongside the President.

The committee is not done discussing the judicial branch and said it would ensure the independence of the judiciary, as well as keep constitutional articles about the judiciary simple and not too detailed, preferring not to list all the numerous judicial bodies of Egypt. The committee asked for a deadline extension of one week.

The Basic Principles of State Committee is finalising its work. Committee rapporteur Mohamed Emara said the committee finalised the basic principles section and has already sent 39 articles to the Drafting Committee so they can be drafted in legal language.

The committee will now just look at the suggestions it received from the public and judge which ones are worthy of inclusion. It will be completely done with its work by the beginning of next week.

The Rights and Freedoms Committee also said it had almost completed its work. Rapporteur Edward Ghalib reported the committee had drafted articles guaranteeing freedom of information, freedom of creativity, scientific research, press and publishing rights, a right to housing and making the state responsible for developing the youth. The committee says it will be done on Sunday.

The Suggestions Committee said it held 65 sessions and received tens of thousands of suggestions from citizens and groups. The committee plans to travel abroad to several gulf countries as well as New York, California, London and Paris after the Eid holiday in order to listen to the suggestions of Egyptians abroad.

Finally, the Drafting Committee outlined the way it would carry out its work. According to rapporteur Hassan Mohamed, the committee receives final agreed upon articles from the specialised committees (Basic Principles of State; System of Governance; Rights and Freedoms; and Independent and Oversight Bodies) then reviews them and drafts them using proper legal language but without changing the intent. Mohamed said the committee was almost done with drafting the Rights and Freedoms section of the constitution.

Constituent Assembly members emphasised that all the articles being discussed, even if they were passed in the specialised committees, are in no way final since each and every constitutional article will be discussed and voted upon individually by the assembly at large.