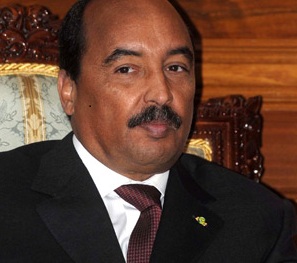 Despite mounting pressure, Mauritanian President Mohamed Ould Abdel Aziz said on Monday night that he will not resign, according to AFP.

His statements come in defiance of calls by Mauritanian opposition that he resign.

However Abdel Aziz says that as he came to power through democratic elections he will not step down. He made the statement while celebrating the third anniversary of his swearing in as President.

The opposition has demanded that a transition government take over from the President, in order to address various issues facing the West African country which include slavery and human rights abuses.

According to Mauritanian news service Sahra Media, the heads of ten parties signed a charter Saturday night stating they will not accept “half solutions” or take part in elections that are not transparent. The opposition added that they will continue in their peaceful democratic struggle until the President resigns, according to Islam Web new service.

Since January 2011, protestors have been demanding reforms. Mass protests took place on 25 February 2011, from which the 25 February opposition movement was created. In recent months have protesters shifted their focus to demanding the resignation of the president.

The West African country suffers from corruption, drought and an unemployment rate of 30 percent, the third highest in the Arab World after Yemen and Djibouti. Slavery is endemic, with CNN estimating that 10 to 20 percent of the country’s population of 3.5 million live in some form of slavery. In addition, the ethnically African population is increasingly disenfranchised by the ruling Arabic class.

While the Mauritanian Parliament passed a bill in 2007 making slavery illegal, CNN says that only one person has ever been successfully prosecuted.

Recent attempts to end slavery were sparked by the 2011 uprisings that shook the Arab World.

Seven anti-slavery activists were arrested in April after burning religious books advocating slavery. When they were tried for threatening state security in June, the court dismissed the case for “incompetence and procedural nullity,” according to the Movement for Justice and Equality in Mauritania. Despite the ruling, the seven remain behind bars.