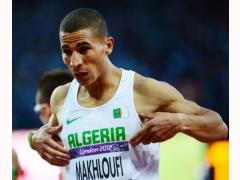 The Arab world won its first gold medal in the 2012 London Olympics when 24 year-old Algerian Taoufik Makhloufi came in first place in the men’s 1,500m. Makhloufi had been briefly excluded from the Olympics for “not trying” in his previous 800 heat. However doctors were able to prove Makhloufi was injured and he was reinstated in time to compete for a gold medal. “It’s the will of God. Yesterday I was out, today I’m in,” Makhloufi told reporters according to Reuters, “This is a gift for the Algerian people and for the whole of the Arabic world.” Egypt has won two silver medals these Olympics in fencing and wrestling courtesy of Alaaeddin Aboulkassem and KaramGaber respectively.