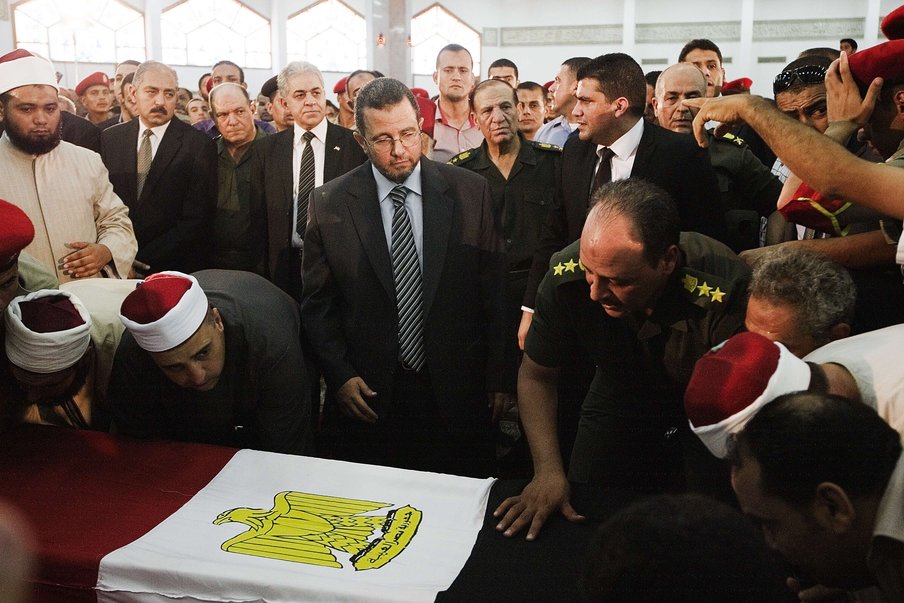 This article is part four of a series that examines the composition of the Qandil cabinet with a close look at allegiances and alliances within.

The fact that a quarter of ministers in Prime Minister Hesham Qandil’s cabinet remain in posts they held in his predecessor Kamal El-Ganzouri’s cabinet is only the tip of the iceberg.

The new cabinet has 13 ministers who were not members of El-Ganzouri’s but nonetheless had public posts in or related to the ministries they now lead. This brings the total number of regime officials in Qandil’s government to 22 out 35, over 62 percent.

Two regional governors have been given ministerial portfolios: Ahmed Zaki Abdeen, the former governor of Kafr El-Sheikh, is now the Minister of Local Development while Cairo governor Abdel-Qawi Khalifa heads the newly created Ministry of Drinking Water and Sanitation Utilities.

As with most regional governors, 17 out a total of 27 in fact, Ahmed Zaki Abdeen is a retired military general. Egyptian governors are appointed by the president, not elected. The trend of appointing military men to these posts is seen as a way to maintain military control in a very Cairo-based, centralised political system.

The appointment of Abdeen is a step to solidify such control. As Minister of Local Development, Abdeen will function as the link between the central Cairo-based government and all the regional governors and assemblies. He will be in charge of organising local council elections, now officially disbanded, but still heavily dominated by former regime figures from the dissolved National Democratic Party.

Local councils, being far from public eye and proper scrutiny, had a reputation for even greater levels of corruption than the government or parliament during former President Hosni Mubarak’s era.

Before being appointed Governor of Kafr El-Sheikh in 2008, Abdeen was governor of Beni Suef from 2006 during Mubarak’s presidency. He was the military attaché at the Egyptian Embassy in the United States before from 1993 to 1995 and was commander of the military’s Engineering Corps when he was still on duty. Despite not serving in any previous cabinets, Abdeen has ties with the Mubarak regime.

Abdeen was deeply unpopular in Kafr El-Sheikh for initiating harsh building laws in the governorate that did not exist anywhere else and ordering extra taxes on schools and hospitals which he was accused of pocketing. Following the 25 January 2011 uprising that toppled Mubarak, a group of Kafr El-Sheikh residents started a campaign calling for Abdeen’s removal.

Abdel-Qawi Khalifa on the other hand was part of the minority of civilian governors. He was appointed governor of Cairo following Mubarak’s ouster and was the head of the Egyptian Company for Water and Waste-Water (HCWW )during the Mubarak era.

As the capital’s governor, Khalifa failed to control the rising sanitation and waste problems during almost two years in office. Massive protests were a regular sight at the governorate building and protesters stopped Khalifa from entering his office several times. He would resort during these incidents to moving to other offices as temporary headquarters and closing down vital services in response to protests.

Khalifa, who was a member of the National Democratic Party, headed the HCWW for seven years before becoming Cairo governor, which explains his appointment to the newly created drinking water and sanitation utilities ministry. During his tenure, both sanitation and drinking water took turns for the worse.

When he first took over, Khalifa initiated 24 branches of the company all over the country and restructured it, yet there was no noticeable improvement. He submitted a plan that promised to guarantee drinking water and proper sanitation all over Egypt until 2037 yet most governorates suffer from scarce drinking water and sanitation has since worsened all over the country despite the state providing Khalifa with a budget of EGP 70 billion.

Qandil’s cabinet demonstrates a trend of appointments to senior figures in Egyptian holding companies, whose heads are appointed by presidential decree, with three more such appointments.

Balbaa was EHC head for a year before his appointment as minister and was the man in direct charge of the electricity situation in Egypt, which has recently taken an extreme turn for the worse. Power cuts for hours a day have become a daily occurrence in most Egyptian households all over the country. Balbaa was also a member of the NDP. His appointment was viewed as controversial by ministry of electricity employees. He had made several promises to EHC workers and failed to deliver, which prompted protests demanding SCAF and El-Ganzouri remove him.

As head of the Petro-chemicals Holding Company, Osama Kamal was responsible for the Mobco fertiliser factory that triggered massive protests in Damiettia due to concerns over the factory’s effect on the environment. He was EPHC head ever since the company’s creation and was close to Mubarak’s petroleum minister Sameh Fahmy, now in prison on corruption charges.

Kamal’s greatest challenge will be ensuring Egypt has enough diesel fuel and gasoline, an ongoing crisis for the past two years and one of President Morsy’s five main concerns that he promised to solve in his first 100 days.

Minister of Supply and Internal Trade Abo-Zeid Mohamed Abo-Zeid was appointed due to his post at the Egyptian Food Industries Holding Company since he will be responsible for ensuring strategic food commodities like sugar, rice and oil are available on the market and properly subsidised.

Considering all holding company chiefs are appointed by the president, it is clear that Qandil’s technocratic independent cabinet is not so independent, with most of these men being tied in one way or another to the regime.

Furthermore, as will be shown in the concluding piece of this series, with the exception of three actual independents, the remaining ministers have all been chosen from inside their ministries, with most being deputy minister for the former minister.