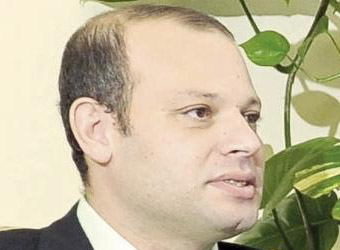 The members expressed optimism with the new minister and his policies to tackle the problems they put forward.

“Spirits of optimism and positive interaction reigned in the meeting, as we felt that the minister understands the nature of the problems that the industrial sector is suffering from,” Mr Mohamed el-Sweedy, Deputy of the IU, described the meeting.

Dr Mohamed el-Bahy, the head of the taxes committee attached to the IU board, told the Daily News Egypt that “Minister Hatim Saleh is a man with a progressive vision, and he has a profound understanding of the problems we put forward, as he was the former head of food industries sector at the IU.”

IU members discussed with Minister Saleh various issues regarding setting a specified timeframe for tackling the problems; reforming the legal structure; taxes; land provisions; and the issue of electricity and water payments.

Egypt’s industrial sector suffers from two main challenges, according to Dr el-Bahy, the first is the lack of adequate protection to domestic industries, that the legal system does not prevent market saturation with imported goods that have no quality certification, the second problem is unfair taxation that some merchants manage to issue fake invoices with very high prices in order to elude tax authorities.

“We need to revamp our legal framework in order to avoid the losses that the industrial sector incurs due to the lack of a robust market regularisation,” Dr el-Bahi stressed. He also added that committees concerned with the problems of each of the industrial sector should be established with clear criteria for choosing and appointing committee members.

Beside the endless problems related to electricity, water and other services, IU members expressed concern over the problem of land allocation to factories required for industrial expansion, as “there is no land being made available for industrial development of this kin,” Mr el-Sweedy claimed.

Mr El-Sweedy also stressed that, “it’s a prerequisite to tackle all these problems that face the domestic investor in order to attract more foreign investment. Strengthening the domestic industrial sector and creating a more positive environment for investment is the only way to galvanise the economy.”