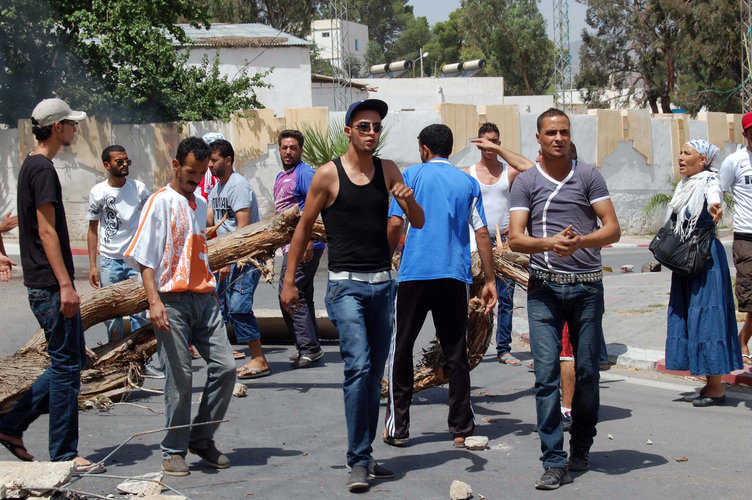 Police dispersed hundreds of protesters with teargas and rubber bullets in the central Tunisian town of Sidi Bouzid on Thursday evening.

Anti-government protesters had gathered to voice their grievances in the town considered to be the birthplace of the Tunisian revolution after Mohamed Bouazizi’s self-immolation took place there in December 2010.

A poor area under the previous administration, protesters expressed frustration with the lack of change in Sidi Bouzid following last year’s elections. Protesters demanded jobs, regional investment, and the resignation of Sidi Bouzid’s governor, and chanted slogans including “work, freedom, and national dignity.”

Events in Sidi Bouzid illustrate the growing impatience among some Tunisians with the country’s young Ennahda-led coalition government. Tunisia’s democratic transition has gone relatively smoothly compared to similar transitions in neighbouring countries, yet economic pressures and unemployment, especially among the youth, still plague the country.

Some political parties have condemned the attack on protesters in Sidi Bouzid. The Workers Party released a statement saying, “[The Workers Party] condemns the brutal repression these protesters encountered by the security forces and calls for a serious independent investigation into this oppression and to hold those responsible.” In its statement the party also alleges the arrest of four protesters.

Tunisian Minister of Investment, Riadh Bettaib, told reporters on Friday that the government expects to receive $1 billion in loans from the World Bank and the African Development Bank (AfDB) in time to fortify the government budget going into the second half of 2012. The loans would be used for infrastructure projects, job creation, and aiding a private sector that has historically struggled in Tunisia, even before its revolution.

In its July paper “Economic and Social Challenges Beyond the Revolution,” the AfDB states, “the government faces a challenging task of not only managing the transition…but also responding to the high expectations of the population, under economic conditions due to the European crisis and the impact of political and social tensions.” The AfDB stressed a decentralised approach to public service investment and claimed, “Tunisian youth unemployment comes mainly from the mismatch between labor supply and the economic structure,” advocating critical structural change for the Tunisian economy so that it can integrate more efficiently with the global economy.