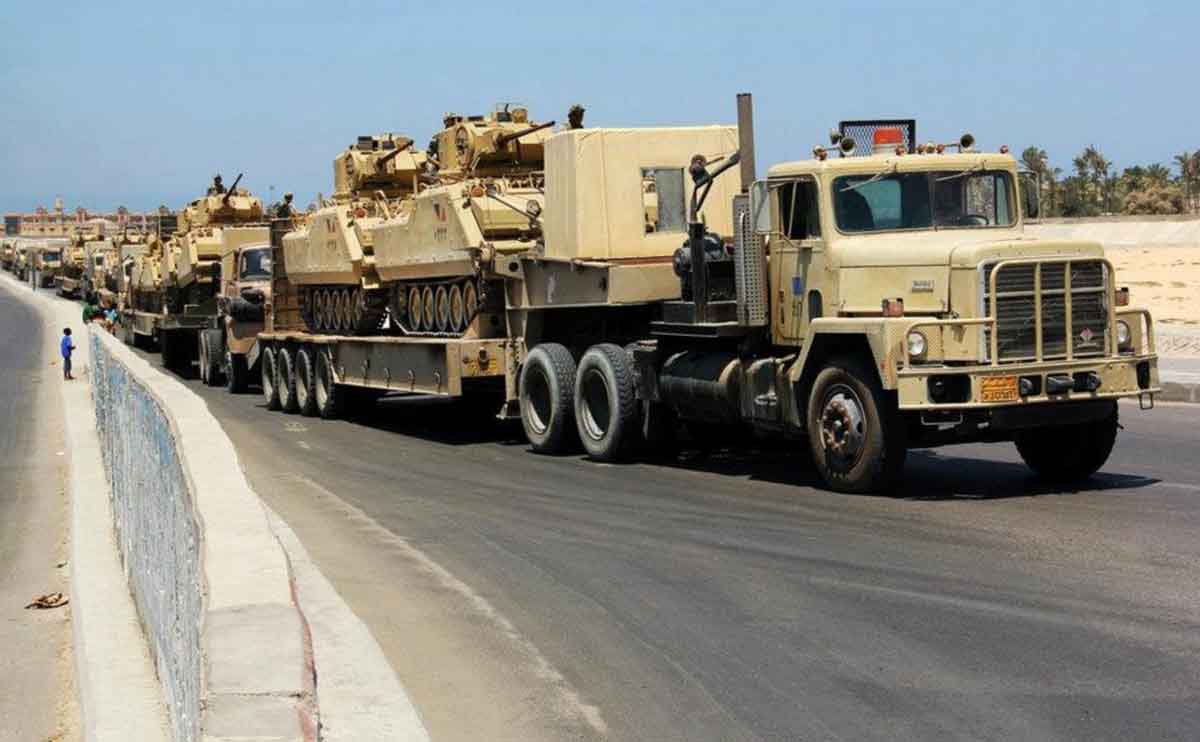 The gunmen who attacked Egyptian Border Guards killing 16 and injuring 10 on the border with Israel in Sinai included Egyptians and Palestinians, Egyptian forensics officials said. Forensics Medical Authority President Ihsan Georgey told the night edition of Al-Ahram that final results from examining the bodies of the six attackers would be announced on Wednesday.

The initial results revealed that the attackers were Egyptians and Arabs said Ashraf Refaie, Assistant Chief Medical Officer at the authority.  The Arabs were most likely Palestinians as they were wearing Palestinian-made shoes and clothes, Refaie said.

Israeli authorities handed over the bodies of six men who had stolen an Armoured Personnel Carrier (APC) after killing the Egyptian soldiers and crossed into Israel.

The Israeli military shot down the APC from a helicopter. The Egyptian military significantly increased its presence in North Sinai, especially in the border towns of Arish and Rafah, following the attack. There has been a notable increase in APCs, armoured jeeps and Special Forces.

The military conducted a wide scale operation in an attempt to find the group responsible for the attack as well as to secure North Sinai which some say has fallen prey to armed Jihadist groups recently. Military officials announced that the armed forces had killed 20 people who they described as terrorists in a raid on Friday. The military has also arrested six suspects. Operation Eagle 2 is being described by the military as the largest mission since the 1973 war. Rockets were launched on the “terrorist hideout” in the border area of Sheikh Zuwaid, a military source told state media.

Al-Ahram quoted another military source who said preparations were underway to raid the mountains in Jebel El Halal which are believed to be where many Jihadists are taking refuge. Despite the hundreds of troops and dozens of military vehicles, including APCs with machine guns as well as M-60 tanks, making their way into North Sinai, residents and Sinai-based journalists and activists say the operations are nothing more than a show.

“There is an increase [in military and police presence in Sinai] but there are no actual efforts, just like the traffic campaigns. It’s an outrage,” Mohamed El-Assal, the leader of the April 6 Youth Movement (Ahmed Maher) North Sinai branch told the Daily News Egypt.

Sinai-based journalists released a statement on Thursday saying that the military operations were being exaggerated in the media and in military statements. The journalists’ statement called on the Egyptian government to “provide real information” regarding what is taking place in North Sinai and was signed by the Al-Masry Al-Youm and Al-Ahram North Sinai bureau chiefs, as well as the Al-Shorouk, Al-Watan, and the state owned Middle East News Agency’s North Sinai correspondents. “We condemn state television’s airing and foreign news agencies’ reporting of inaccurate information about unconfirmed deaths resulting from Egyptian military operations,” the statement read.

Al-Shorouk’s correspondent Mostafa Singer wrote on Wednesday that the “results of the military operations in Sinai are null” while a website claiming to represent Jihadists disputed the news that any Jihadists had been killed and rejected the military’s claim of destroying two APCs belonging to Jihadists, saying that Jihadists do not have access to APCs to begin with.

Witnesses told Reuters news agency they saw troops firing their weapons in the air and not actually engaging with anyone. “We thought they were chasing someone, but their arms were directed up and we didn’t see who they were fighting with. We couldn’t find any bodies or signs of battle after they left,” a man who requested anonymity told Reuters.