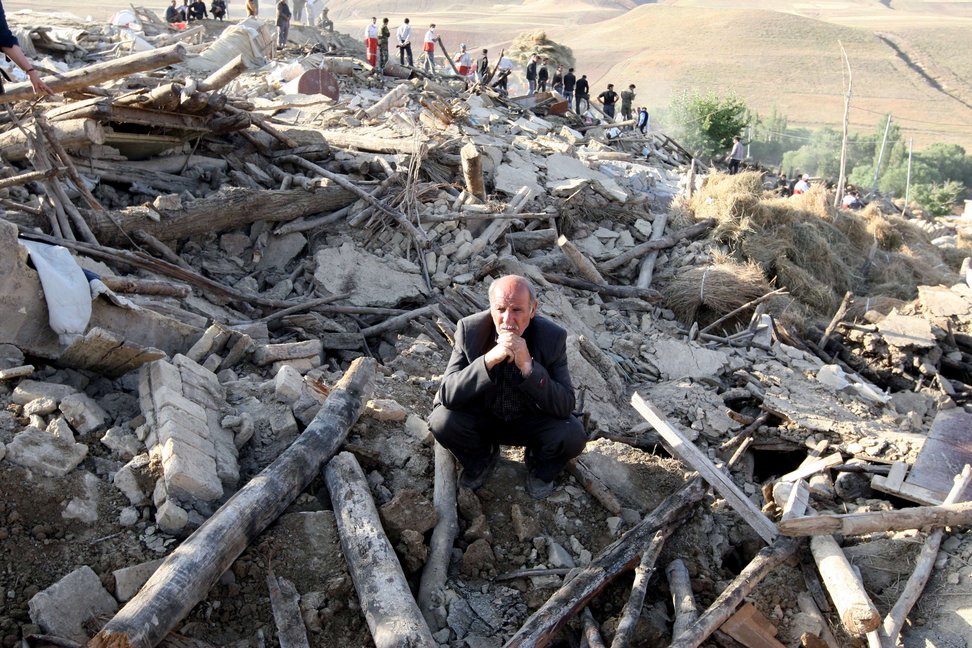 Four earthquakes hit Iran on Saturday afternoon.  The earthquakes struck near the Armenian and Azeri borders, outside the northern Iranian town of Tabriz.  On Sunday, AFP reported 227 dead and approximately 2,000 injured.

Over the next 24 hours rescuers worked to pull bodies from the wreckage of hundreds of villages around Tabriz that were either damaged or completely destroyed.  While urban population centers remained largely intact, their hospitals were filling with the wounded.

Iran’s Interior Minister Moustafa Mohammad-Najja said that his government has completed the search-and-rescue phase and is now transitioning to the provisions of food and shelter for those displaced.

Photos from the FARS state news agency show a decimated countryside around Tabriz.  The images show despairing citizens with their possessions packed in plastic bags, as sheep walk beside the rubble of destroyed homes.  Cars were flattened and stone walls were torn from buildings.  Iranian Mehr News Agency also released photos of adults and children lying dead and uncovered on hospital floors.

The earthquake comes at a time when Iran’s economy is already being assaulted by sanctions imposed by the US and the EU.  US citizens and companies have long been outlawed from almost all trading or banking transactions with Iran, and sanctions put in place by US President Barak Obama last month consisted of financially sophisticated sanctions aimed to prohibit Iran from repatriating revenue from oil sales to foreign nations.

A member of the Cairo office of the United Nations Office for the Coordination of Humanitarian affairs said that sanctions are unlikely to have a direct effect on the ability for Iran to respond.  He said this is primarily because the size of the quake has not pushed Iran to request outside assistance.

Relations between the US and Iran are again at a particularly tense juncture, with Iran dodging questions about its nuclear program and the US applying additional sanctions on the Islamic Republic as recently as the morning of the Tabriz quake.  It is left to be seen if this natural disaster will help to budge the stances of those in Washington and Tehran.

In the aftermath of the 2003 Bam earthquake that wreaked havoc on central Iran, killing more than 26,000 and injuring 30,000, American officials offered prayers for the Iranian victims, but also took more pragmatic steps such as easing restrictions on Iranian banks and sending planes full of medical supplies and personnel.