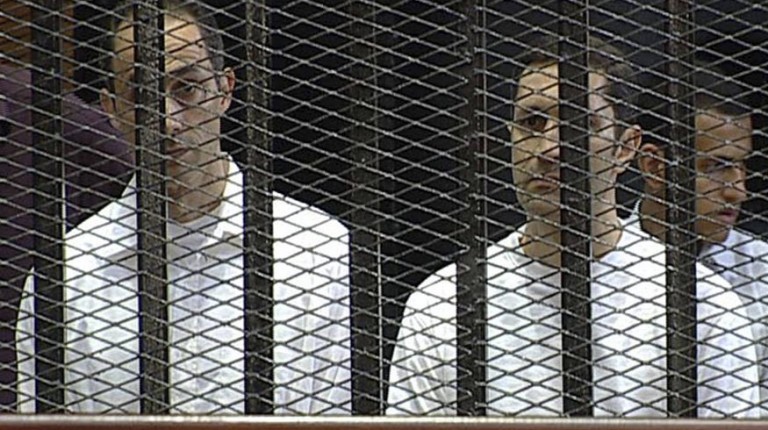 The conditions in Tora prison hospital, where Hosni Mubarak is imprisoned, are satisfactory according to a panel of inspectors.

A delegation sent by the National Council for Human Rights (NCHR) visited the prison Sunday, after a complaint filed by Gamal Mubarak alleged poor conditions in the detention centre’s hospital.

The state-run NCHR received the formal complaint from Farid Al-Deeb, Gamal Mubarak’s lawyer, about the conditions of the Tora Prison hospital, where his father, ousted President Hosni Mubarak, is serving a life sentence (25 years)along with former Minister of the Interior Habib Al-Adly.

Gamal Mubarak alleged the hospital had inadequate facilities to cater to his ailing father’s medical needs.

NCHR head Mohamed Fayek said on Friday that his organisation would send a group of representatives to the prison to investigate Mubarak’s complaint. According to state-run Al-Ahram, the delegation spent three hours on Sunday visiting Tora Prison and its hospital and met both Hosni and Gamal Mubarak. The group that visited Tora Prison included Osama Ghazali Harb, Youssef Al-Qaeed, Hafez Abu Saada, and Nasser Amin.

This is not the first time the NCHR has inspected the prison. The organisation released a statement in May summarising a visit of the prison and the hospital. It reported good healthcare by medical staff, but highlighted inmates in need of serious medical attention that could not be obtained at the hospital.

Gamal Mubarak himself is currently an inmate at the prison. He and his brother Alaa faced similar charges to their father of failing to protect protesters, but were both acquitted. They are currently being held for charges of insider trading and corruption. The Cairo Criminal Court has postponed their trial for 8 September and has determined that they remain in Tora prison pending their trial.

Hosni Mubarak was sentenced on 2 June, and his health before, during, and after his trial has been the subject of much public scrutiny as he was moved to and from Tora prison and military hospitals.

The delegation will put its finding into a report and submit it to the NCHR and general prosecutor.