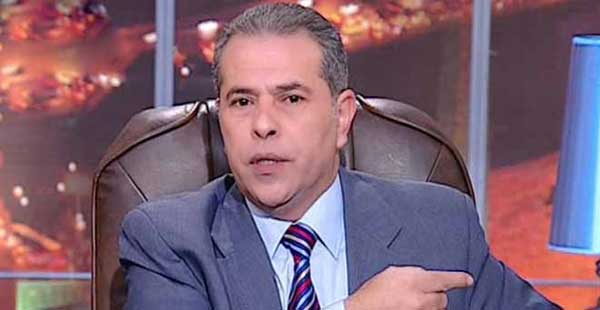 Prominent (unfortunately) media personality and television show host Tawfiq Okasha is currently under investigation for inciting hatred against President Mohamed Morsy and calling for his assassination on air. The Ministry of Investment has shut down the Faraeen channel which Okasha owns.

Hundreds of Okasha’s supporters and employees of Faraeen have gathered in front of the public prosecutor’s office calling for Okasha’s release. The protestors chanted against Morsy and his group, the Muslim Brotherhood, repeating allegations first perpetrated by Okasha that the Brotherhood was involved in the killing of protesters in the January 2011 uprising that toppled former President Hosni Mubarak. The protesters demand Morsy and the Brotherhood face legal actions instead.

Okasha has recently come under fire for statements made on a candid camera television show where guests are initially told they are on a German channel. The show’s host then asks leading questions about Israel and it is revealed to the guests they are actually on an Israeli channel. The most common reaction of the guests is throwing a fit, one guest even physically assaulted the female presenter and pulled a gun on the crew, the truth is revealed and guests are told the show is actually Egyptian. Hilarious.

Our hero is in trouble for not following the formula, however. Okasha gave answers favourable to Israel and when he was told the show was Israeli he did not seem to mind. He said he believed in Israeli claims to Palestinian land, that the Arabs are entitled to Al-Aqsa mosque in Jerusalem only, the rest of which is Israeli birthright, and that he has good connections with several Israeli Arabs.

It was only when he was told the show is Egyptian, the part that usually calms down the other guests, that Okasha became visibly upset. He demanded the episode not be run, said that what he says on an Egyptian channel is different to what he says on an Israeli channel, and, according to the show’s producers, threatened them into deleting the episode, of which only a small part has been released, leaving many to wonder what other gems he might have espoused.

Tawfiq Okasha is an enigma. He also presents one with a huge dilemma. You can choose to believe Okasha is indeed as stupid and mad as he appears and subsequently lose faith in humanity. This stance would leave you unable to determine which is sadder: the depth to which he redefines idiocy every day or the fact that he actually has a strong following and that someone out there believes every word he says, to the point that he can mobilise tens of thousands to his causes.

Or you can choose to believe he is faking it and that he is actually part of some elaborate plot, an agent of some intelligence agency, Egyptian or foreign. But then you run the risk of being labelled a conspiracy theorist, falling into the trap of actually emulating the man’s unwavering belief that free masons are behind everything from the Egyptian revolution to the lack of tomato chips at the kiosk beneath your house. This would surely eventually lead to having your press card revoked, losing any prospect of working for a proper newspaper, and ending up writing a blog full time, probably about the imminent New World Order. It is a slippery slope.

A close analysis of his show and audience reveals what could be called “the Okasha cycle”, which lends credit to the theory that the man is smarter than he looks. Not exactly a hard feat, though.

Okasha goes on the air for hours, rambling about his chosen enemies – revolutionaries pre-presidential elections and the Brotherhood afterwards. (It is interesting to notice how he never attacked the Brotherhood when they were allied with the Supreme Council of the Armed Forces.) He accuses them of treason, free masonry and the like. Many hilarious and outlandish statements are made at this stage.

His already loyal audience completely believe him. Others however tune in for a laugh. Some watch him once and then never think of it again. Some, however, get hooked. His show is never short on laughs.

Slowly a contingent of those watching him for a laugh start thinking he may not be so ridiculous, maybe he does make sense. This is doubly true for those who initially find him silly but are ideologically aligned to him nonetheless. It is surprising what one’s hatred of the revolution or Islamists can do.

Those most bitter towards either contingent go even further in their transformation. They start attending rallies and demonstrations Okasha called for. Eventually they head to manasa under the leadership of Okasha.

The transformation is complete, and an Okashite is born.

Tell me this is not the work of a brilliant, cunning strategist. No? I better get started on that blog.