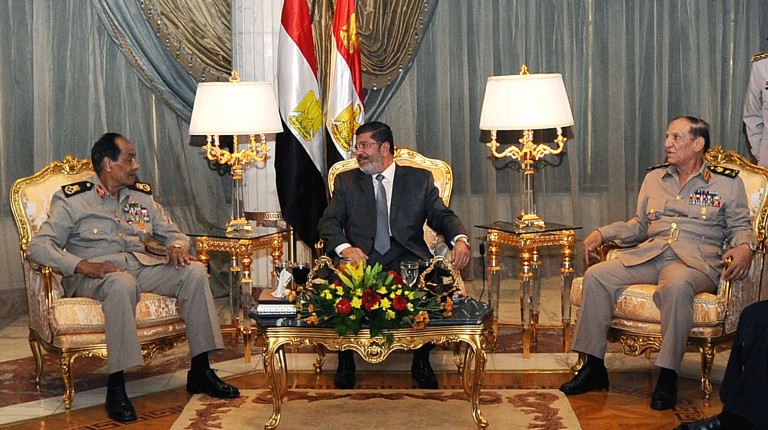 Abdel-Fatah Al-Sisi must have been very happy as he received the news on Sunday. He was to be promoted two full ranks in one go from Staff Major General to full General and appointed Commander-in-Chief of the Armed Forces and Minister of Defence and Military Production. He was suddenly Egypt’s top military leader.

The former Director of the Military Intelligence and Scouting Agency is, at 57 years old, one of the youngest members of the Supreme Council of the Armed Forces. He was born in 1954, while his predecessor, Hussein Tantawi, was commissioned as an officer soon after in 1956.

Al-Sisi’s appointment came after President Mohamed Morsy announced he had retired Tantawi. Al-Sisi took the oath of office in front of Morsy soon after.

The new military chief will face many challenges, the largest of which is to function as the link between the newly-elected civilian authority, headed by the Muslim Brotherhood’s President Morsy, and a military that is used to being in power and making all the important decisions. The situation is made more complex by the historical animosity between the Brotherhood and the military since 1954.

Controversial talk show host and Al-Fara’een television channel owner Tawfiq Okasha had accused Al-Sisi on 25 June, the day Morsy’s victory in the presidential election was announced, of being a secret member of the Muslim Brotherhood. Okasha said that Al-Sisi was the Brotherhood’s man inside the military council.

El Sissy was also the first military official to admit to the media the conducting of “virginity tests” by the military on female protestors. In June 2011 he told the Human Rights Watch and the BBC that army soldiers performed the tests on several women on 9 March 2011 to ensure they do not get accused of rape.

“These are not like your or my daughters,” he said. The SCAF later issued a statement denying the incident but the damage had already been done and the tests were proved to have taken place by an Egyptian court.

Before he was military intelligence chief, Al-Sisi was the Commander of the Northern Military Zone.

As Commander-in-Chief Al-Sisi is being put in charge of a military that is currently embroiled in a struggle on its borders in North Sinai.

It was the killing of 16 soldiers and injury of a further ten by unknown attackers on the Egyptian Israeli border in Rafah that served as a catalyst for Morsy’s decision to sack Tantawi and other military leaders, and regaining control over North Sinai will be one of El-Sisi main priorities.

El-Sisi was also given two new deputies by Morsy. On the military side of things the President has also sent the former Chief of Staff of the Armed Forces Sami Anan into retirement. He promoted Major General Sedki Sobhi, Commander of the Third Field Army, to Lieutenant General and made him Anan’s replacement.

Sobhi is the youngest SCAF member at the age of 56. He is now in direct command of all Egyptian troops and officers.

Unlike Al-Sisi and Sobhi, Al-Assar is a high profile member of SCAF, frequently making media appearances. Al-Assar was responsible for foreign affairs within the military council after it took over leadership following the ouster of former President Hosni Mubarak in the 25 January 2011 uprising.

He was the head of the Armament Authority for seven years until he reached retirement age in 2001. Tantawi then created the new post of Assistant Defense Minister for Armament Affairs and appointed him to it, transferring all the powers of his previous post to the new one.

As the man responsible for armament, Al-Assar oversaw all major arms deals that the Egyptian military was involved with. As such, Al-Assar boasts excellent relationships with the United States military leadership and alongside Anan was the main link between the Egyptian and American militaries, which is perhaps the reason he was kept in his post by Morsy.

In July 2011 Al-Assar gave a lecture at the governmental American Peace Institute titles “Beyond Tahrir: The Trajectory of Egypt’s Transition.” Al-Assar handles the purchasing of American weapons using the $1.3 billion the Egyptian military receives as military aid from the US.

Following Morsy’s SCAF reshuffle, there are still holes to be plugged within Egypt’s military leadership. The president has tasked Al-Sisi with appointing a new Director of the Military Intelligence and Scouting Agency and Commander of the Third Field Army following his and Sedki’s promotions.

Furthermore, before he removed him, Morsy had instructed Tantawi to replace the Chief of Military Police Hamdy Badeen, a task that is also now Al-Sisi’s.

It is not yet clear whether Al-Sisi will be SCAF chairman with Sedki as his deputy or if Morsy will assume the title of Supreme Commander of the Armed Forces and chair the council himself, in which case Al-Sisi would be its deputy chairman.

In any case, Al-Sisi will definitely not enjoy as much power as his predecessor with there now being an elected civilian president who has shown keenness to implement the principle of civilian control over the military.