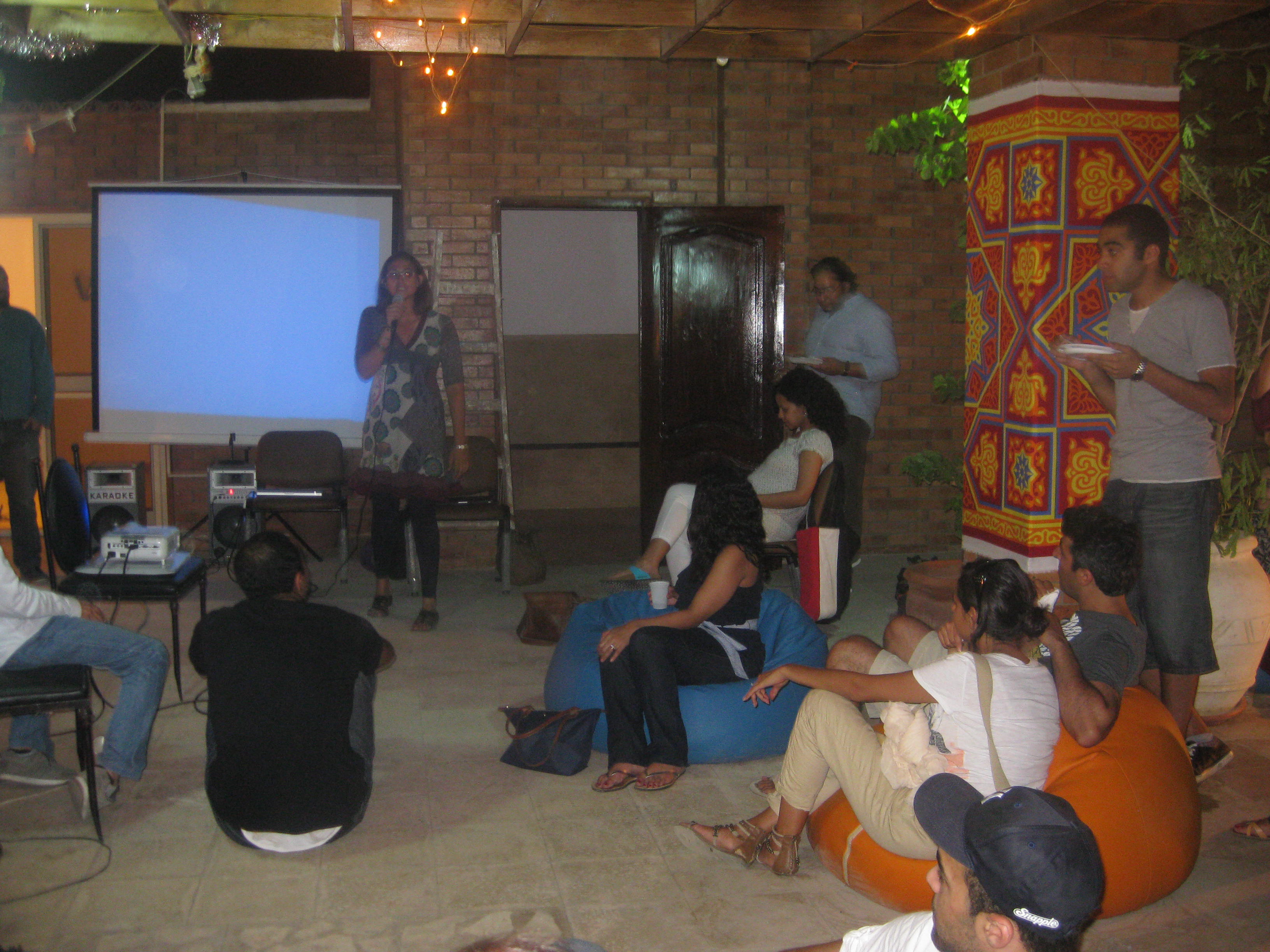 At the beginning of the 1979 cult classic film “The Warriors”, the gangs of New York City are brought together to consider the joint creation of a new and better future. That is sort of what it was like at Veggie Iftar Cairo this weekend, where green-focused NGOs collaborated to put on a vegetarian, consciousness-raising, rooftop, potluck iftar.

If Saturday night was like the gang meeting at the beginning of ‘The Warriors’, then Mai ElZeiny is sort of like Cyrus, the prophetic figure who plans and gathers the various groups.

ElZeiny organized a similar event called Veggie Fest Cairo last January, just before the revolution. She put on Veggie Iftar Cairo this week because she wants to “promote a conscious and healthy lifestyle. We want people to question what they eat and how they live.”

The potluck was co-hosted by the Green Arm Initiative and Marshrou3 Al Mareekh.  Both of these organisations were “incubated” by Nahdet El Mahrousa, an NGO that works with youth-led social enterprises. They offer resources and guidance to get well-intentioned projects off the ground. Green Arm and Marshrou3 are two of their success stories.

Ahmed El-Dorghamy, the head of Green Arm, said that they were created to promote “greener and more socially aware lifestyles.” He said they do not limit themselves to changing only the environmental aspects of the streets. He pointed to their teaming up with HarrasMap as evidence of their broader goal of making the streets of Cairo a better place.

Marshrou3 Al Mareekh was started by Mariam El-Quessny who felt “we need a space where we can express ourselves, without needing to be funny or talented in some way.” El-Quessny hosts a unique brand of free-form open-mic nights where people can sing or dance, or simply speak their minds. “Like Facebook,” she says, “but we need a place where everyone is physically present.”

The event was held at the District in Maadi, which was one last ingredient of collaboration. The District is an innovative place that offers office space to people who want to work or meet in an environment that promises to be inspirational, productive, and dynamic. The idea is that if creative, clever people all over Cairo are working on new projects, they should probably be doing so in the same place.

The potluck was a huge success. Around 70 guests brought dish after dish, until organisers had to rearrange the tables to make room for over three dozen plates and tupperware filled exclusively with vegetarian cuisine. There was an eggplant, chickpea, and spinach subji steamed in a cream garam masala sauce. There was also vegan sushi, Indian biryani rice, and pasta with broccoli and white wine and soy sauce. Then there were Egyptian dishes like grape leaves and koshary that need no alteration to vegify.

To a meat-centric palate, the choices might have seemed more like a variation on a single taste.  But that didn’t stop me from eating my fill, and sneaking seconds of the amazing homemade carrot cake.

After the food had been lustily picked over, representatives from various green initiatives took turns addressing the crowd.

The first were members of an NGO called Nawaya. Their name can be translated as “intentions” or the plural of “seed,” a solid title for a group encouraging people to be more intentional with their seed use. The Nawaya representatives talked about their plan to bomb Cairo. (The speaker paused after delivering this line.) They are planning a campaign to bike around the city hurling specially made pods of mud with seeds inside. A video that showed how to make the pods and explaining how the bombing would lead to plants and food sprouting up throughout the concrete jungle was then screened.

Next, volunteers from Green Arm spoke. They addressed topics ranging from our global surpassing of the safe upper limit for carbon dioxide, to outreach methods aimed at promoting carpooling and bike-riding to work.

Finally, Masrou3 El Mareekh took the stage and we were treated to the open-mic project in action. Two women had the crowd laughing at their skit impersonating a food advertisement; someone else told a story about how gleeful it is to scooter across Cairo to work; a spoken-word artist humbly offered up a long-form rhyme about the benefits of solar energy.

Midway through our food, an Egyptian friend I brought along leaned over to me and whispered, “These are the first Egyptian vegetarians I have ever seen.”

It is also worth noting that in that opening scene of “The Warriors”, Cyrus is shot dead, and his dream of a new and better future dies with him.

All of this is a hyperbolic way of saying that greening Cairo seems like an exceptionally steep slope to climb, especially when you are not allowed to drive a car.

As Cyrus would say, “Can you dig it?”