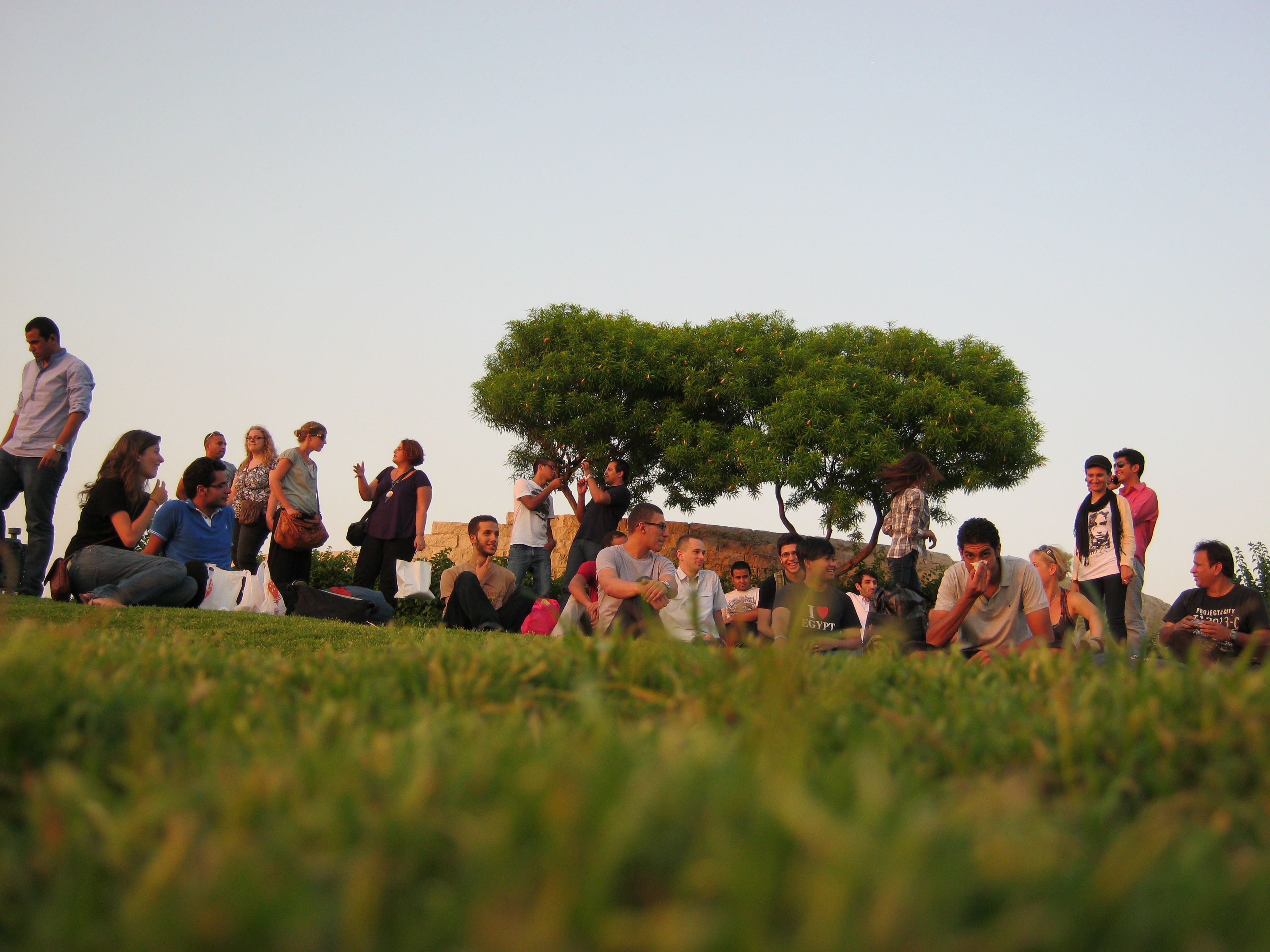 The third annual flash mob organised by the administrator of the Cairo Scholars Egypt Facebook page was held Saturday at Al-Azhar Park. The objective of the event was to create a short video promoting Egypt to foreigners who have been reluctant to visit the country since the revolution.

The usual route to promote tourism in Egypt is through advertising and big spending. Those choices revolve around businesses that have a specific and vested interest in seeing tourism return. You know these ads; come to Dahab, cruise the Nile, relax in class, in our hotel of course. They are not promoting Egypt itself, but are mainly promoting themselves. Such ads are hardly convincing anyone that all is well under the sun because the angle from which they are taken is painfully obvious and they do not address the questions prospective tourists may have.

What if they were to come across a video of Egyptians and foreigners breaking fast, talking, dancing and just being silly together? What if the commercial they saw is not promoting this business or that resort, but promotes the notion that Egyptians have humour and fun personalities and are not all bearded, Molotov-tossing, women-harassing bad guys looking for a reason to rip them off.

This is where Shady Noor comes in. Noor began running flash mobs (events organised through social media in which participants assemble, apparently at random, in public for a prearranged activity) in Cairo three years ago. Originally the concept was to create connections between Egyptians and foreigners in Cairo. As the administrator of the Cairo Scholars Facebook page (a service for expatriate students to share information) and a well-known Couch Surfer himself (Couch Surfers is an organisation devoted to cultural exchanges based upon offering free accommodation to travellers in member’s homes), Noor was well-suited to run such events. Since the revolution however, Noor has turned his attention to promoting Egypt, and Egyptians specifically, in a bid to help shatter the limited image of a country in turmoil and a people too foreign for outsiders to understand. “I want to show the world that it is fine to visit Egypt now,” Noor explained. “When people outside Egypt see the flash mob video they will see that Egyptians are just like them.”

Last Saturday’s flash mob was a moderate success. Around 50 people attended, with many stragglers showing up just before we were set to start. As the sun began to make its way down the horizon, and families gathered at the park for Iftar, the signal to start was given. For the next ten seconds everyone scrambled to find a pose, and continued to hold the pose for the next three minutes. A videographer roamed around the still participants.

People from all around the globe attended the event, including Japanese, Vietnamese, Americans, Canadians, Egyptians, and Dutch. After the flash mob, the gathered crowd uncovered the dishes they had prepared at home and shared an Iftar. As the evening progressed the conversations turned to politics, music, religion and philosophy. Telephone numbers were exchanged and rides were offered. All left that much wiser.

Noor spends his time between Thailand and Egypt but while he is in the country he is organises many weekly events. Besides the annual flash mob he organises weekly events such as an Iftar during Ramadan, felucca trips on the Nile, trips around the city and language exchanges. His events are popular among the Cairo Scholars community, connecting foreigners and Egyptians alike and creating experiences which help shatter the barriers separating different cultures.