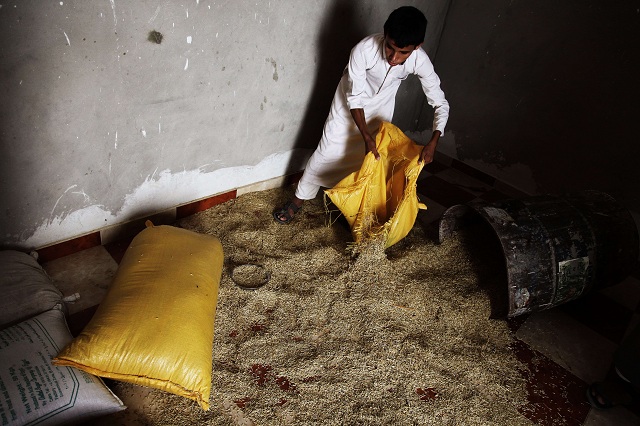 The Minister of Interior Ahmed Gamal el-Deen held a closed meeting with Bedouin tribal leaders and prominent tribal figures of North Sinai in the security directorate in Areesh, North Sinai on Thursday.

The tribal leaders promised to support the Egyptian army and the Ministry of Interior in their joint crackdowns on terrorism in Sinai, with the goal of restoring and maintaining security in the peninsula.

Reports stated that during the meeting, the Minister of the Interior urged the leaders to defend their land against terrorism by cooperating with the security forces.  He also said that the Ministry of the Interior is ready to consider legalizing the situation of those who wish to obtain personal weapons in Sinai.

The state news agency MENA announced that six suspected Islamist extremists were arrested on Friday. They are suspected of being part of a terrorist Jihadist group.

“These six were arrested because they were accused in the Taba incidents a few years ago,” said Ahmed Abo Deraa, a Sinai activist.

Abo Deraa added that the six are from two tribes, el-Swarka and Tarabeen. He believes they were only arrested for investigations to get information that would hopefully lead to terrorist groups in the region.

“The tribes are against the random arrests and are afraid that the six will be scapegoats for the real terrorists,” Abo Deraa said.

Ahl el-Sunna w el Gamaa, a Salafi group in Sinai, called for a popular conference to comment on the arrests in the North Sinai Bedouin town of Sheikh Zoweid on Saturday.

“The people feel that it is a repetition of what used to happen During Mubarak’s era; arresting people just because they are devout Muslims,” said Abo Deraa.

State television reported that the military killed 20 Islamist extremists in North Sinai on Wednesday.  Tribal leaders said they suspect the reporting and asked the Minister of Interior to show them even one body out of the twenty.

The Ministry of the Interior said that they couldn’t confirm or deny the incident as it was an operation by the Second Field Army.

“I was with them during the crackdown and nobody was killed,” said Abo Deraa.

Abo Deraa added that joint forces from the army and the police was just sweeping the North Sinai area, and fired in the air in an attempt to test the waters. They wanted to see if there will be a response to the fire, he said.

The Egyptian army continues to conduct crackdowns and security operations in Sinai to quell radical jihadists after the attack that killed 16 border guards in Rafah last Sunday.

All North Sinai tribes have agreed to help in the security operations and seal the tunnels between Sinai and Gaza despite their differences with the government in Cairo that have long marginalized the tribes and ignored their rights.   After the 2004 Taba bombing, Egyptian human rights groups reported that approximately 3,000 Bedouins were arrested, held without charge and tortured by Egyptian central security forces.