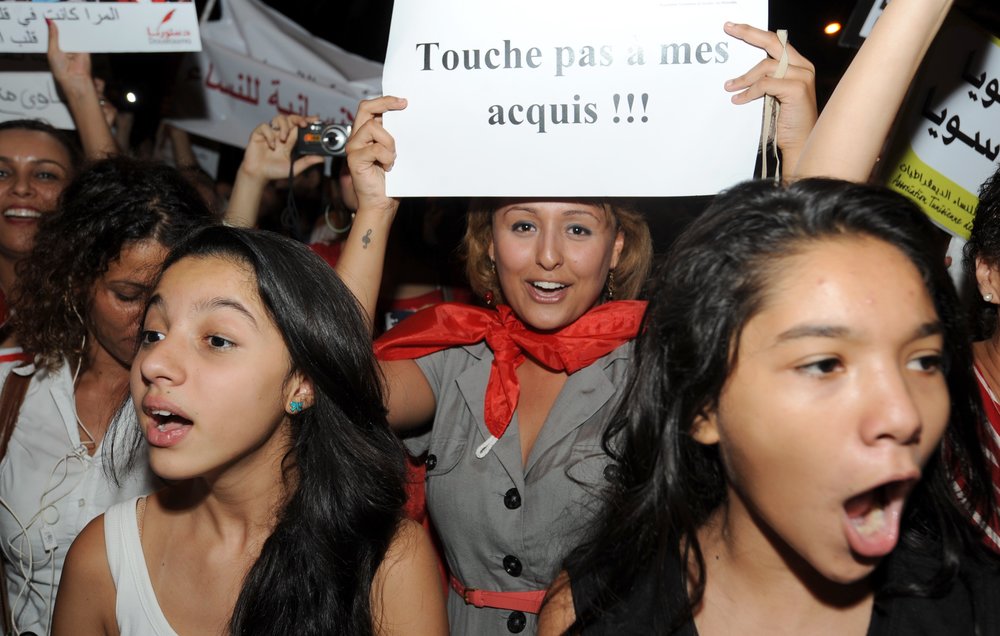 Roughly 6,000 protesters, mostly female, took to the streets of Tunis on Monday to protest changes made to the draft constitution which they believe could have a severely negative impact on women’s rights in Tunisia. This protest is the latest criticism and discontent geared against the Islamist-dominated Constituent Assembly, which is being attacked by both secular and Salafist Muslim groups.

Tunisia’s first democratically elected constituent assembly since the fall of Zine El-Abidine Ben Ali’s government is dominated by the Islamist Ennahda party, who secured 90 out of the 217 seats during the elections in October.  The specific constitutional article which has caused such uproar defines women as a “complement with the man in the family and an associate to the man in the development of the country.”Protesters demanded that the wording of the 1956 constitution, which recognises women as full equals to men, remain in place.

The demonstration began after the evening prayers which signal the end of the Ramadan fast. Protesters marched across the busiest parts of Tunis demanding that the government stop the re-wording of the constitutional article and instead focus their attention on more pressing issues such as unemployment and regional development. Reuters reported roughly 6,000 people took part, with banners and signs which read “”Rise up women for your rights to be enshrined in the constitution.”

Sami Layouni, 40, was among a minority of men attending the protest. “We are here to support women and to say there are men who stand for women’s rights,” he told Reuters, carrying a placard that said: “A woman is no complement, she is everything.”

Ennahda was banned under Al-Abidine Ben Ali’s rule but became a strong political force following Ben Ali’s ouster and the lead up to the Constituent Assembly elections. Ennahda formed a coalition with two other secular parties, and elected Monzef Marzouki as president through a majority vote in the new Constituent Assembly.  Marzouki himself was very critical of the former government and is a well-known human rights advocate, as well as the former President of the Arab Commission for Human Rights.

The Sunday before the protest took place, Marzouki spoke at a Women’s Day conference.   “Today, no one can threaten women’s achievements which have become, thanks to several generations’ activism, an irreversible social reality which cannot be contested or overbid,” he said.

Despite Marzouki’s words, and Ennahda’s promise not to impose strict Muslim laws, several incidents and changes to the constitution which are in and of themselves Islamic have found their way into the draft constitution. On 1 August there was a proposed draft law put forward by Ennahda which would criminalise offenses against vaguely defined “sacred values” and offer up to two years in prison and fines up to 2,000 Dinars.A Tunisian blogger and journalist was arrested on 5 August for drinking in public during the Month of Ramadan, although Amnesty International released a statement saying they believed he was arrested for his staunch opposition of the current government. Eric Goldstein, Deputy Middle East and North Africa Director for the Human Rights Watch, said that if the proposed draft law criminalising violations of
“sacred values” were to be enacted, it “would introduce a new form of censorship in a country that suffered from so much censorship under the ousted president.”