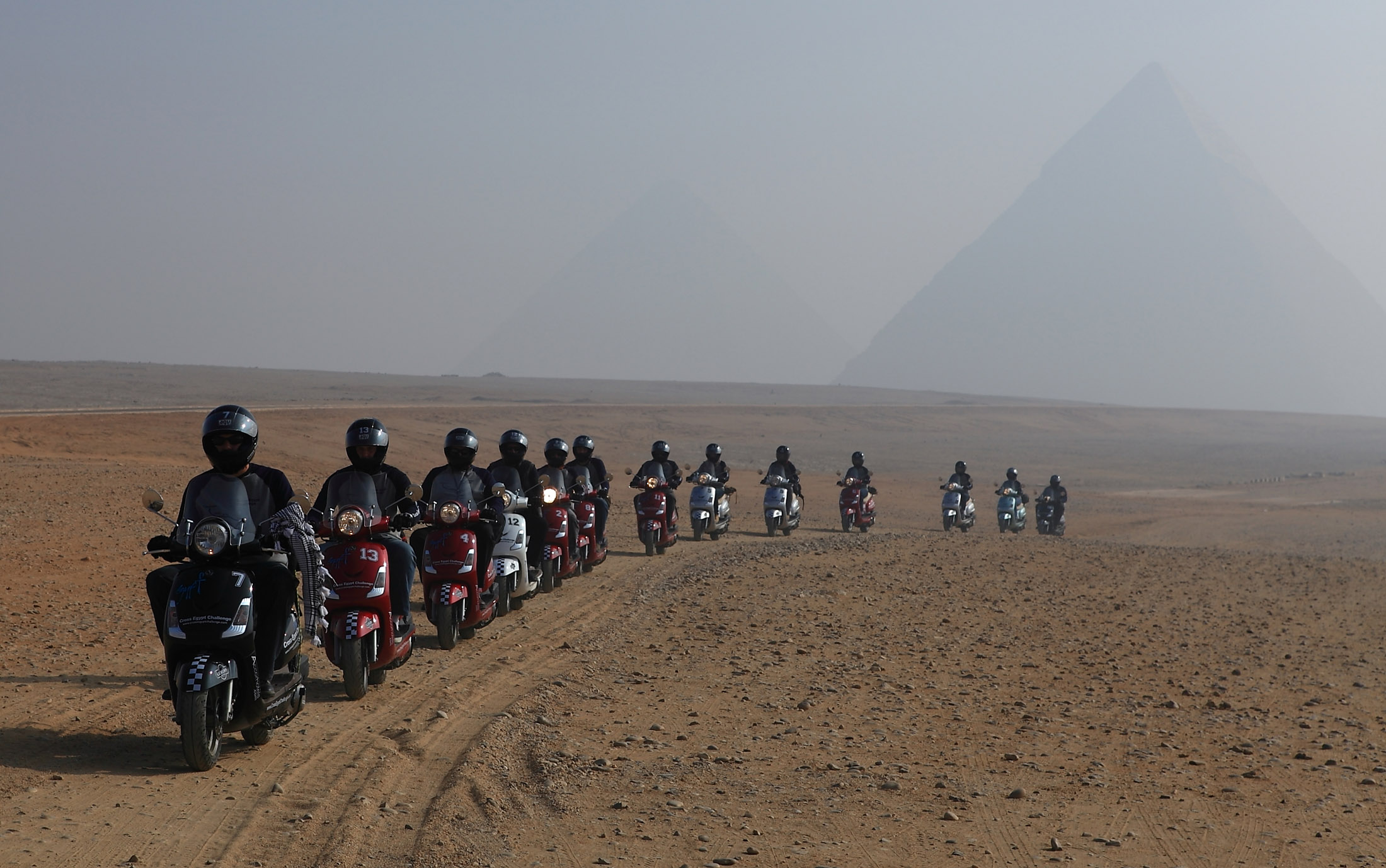 The Cross Egypt Challenge is gearing up for its second edition slated to start on 12 October. The annual event will see 30 participants traverse Egypt on scooters to draw attention to the beauty and safety of the country and encourage tourists to return. The closing date for applications has been extended several days until after the upcoming Eid.

One night in Alexandria, Ahmad El Zoghby, Founder of the Cross Egypt Challenge, was enjoying a normal evening with his cousins when one of them suggested they should take a trip to Sharm El Sheikh – on their scooters. The rest is history.

Due to the terrible traffic that plagues Egypt as a whole, scooters have become a normal sight on the streets of Egypt, but are normally used as a means to a destination within the boundaries of cities and towns. The idea of travelling to another city by scooter intrigued El Zoghby. After a few days, at another get together with his cousins, he proposed a daring idea. “I thought if we could go to Sharm, we could go anywhere else,” he told the Daily News Egypt. “Scooter rallies are organised all over the world, but nothing like this had ever be done in Egypt. And there is no reason why we should not have an event like that here; we have the space, a beautiful country and great places to visit.”

The declining tourist numbers after the revolution worried El Zoghby and the Cross Egypt Challenge seemed a good idea to generate international media interest. “After the revolution, the global media focussed mainly on the problems Egypt was having, creating the impression that Egypt had stopped being safe,” he explained. “Yes, we are facing big challenges but for the most part Egypt is a safe place to be. I wanted to show the world that it is possible to travel across the country on a scooter and arrive safely.”

The international media loved the idea, and stories were carried by the likes of BBC, National Geographic and the Discovery Channel. After last year’s success, El Zoghby and his team decided that they would turn the Cross Egypt Challenge into an annual event. The 2012 edition will see 30 participants, double the amount from last year, travel from Cairo to Alexandria and westwards to Marsa Matrouh. From there the route will turn south, seeking out the oases of the Egyptian Sahara – Siwa, Bahareya, Farafra, Dakhla and Kharga – to finish in Luxor. During the eight day trip the participants will have travelled a 2400 kilometre route.

El Zoghby, owner of an advertising agency, explained how the funding of the event is organised. “The participants pay a fee of EGP 7500, which covers all the costs during the eight days of the event. We get some sponsorship money and the rest I fund personally,” he said.  “We have a wonderful team of 26 volunteers without whom the Cross Egypt Challenge would not be possible.”

There are a few basic criteria prospective scooter enthusiasts need to meet to be able to apply: being physically fit, over 18 years of age and hold a valid motorcycle or driver license.

Participants do not have to bring their own equipment.  “We provide everyone with a scooter and shirts. It gives everyone a consistent look and the spare parts are uniform, which makes it logistically all a lot easier,” El Zoghby explained.

The Cross Egypt Challenge is not a male only event. “Last year we had three female Egyptian participants, and thus far two women have applied for this year’s edition, but no Egyptian women yet,” El Zoghby said. “We have received over 55 applications up to now, from Egypt and the rest of the world, like South Africa, Argentina, The United Kingdom, India and Singapore to name but a few.”

With the application date extended until after Eid there is still time for enthusiasts to send in their application to join in the Cross Egypt Challenge 2012.