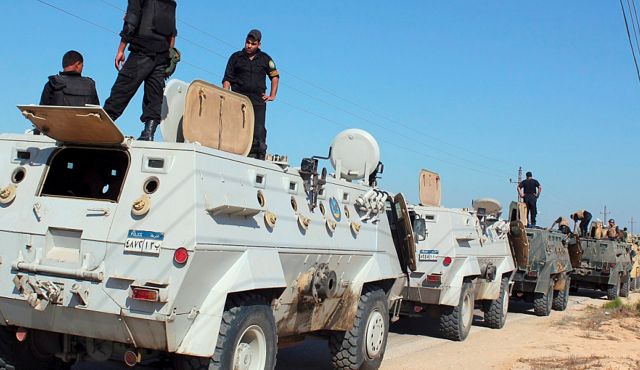 Three Egyptian military officers and a police officer were wounded on Saturday after their convoy was attacked along a major road linking the Egypt-Gaza border crossing town of Rafah and Arish, Northern Sinai’s principle city. Tensions have been mounting in the area since an attack on 4 August by armed men on a security check point left 16 Egyptian soldiers dead, resulting in the largest effort to clamp down on the large militant presence in the Sinai since the signing of the Camp David Accord in 1979.

According to unnamed security officials cited by the Associated Press, who spoke on condition of anonymity because they were not authorised to disclose information, the attack occurred as security forces were returning to their base after conducting raids in a nearby town. A rocket-propelled grenade was fired at the security convoy, which also carried two suspects that had been arrested earlier. No deaths have been reported from the attack.

Islamist militant groups have been blamed for the 4 August attack, and the media is awash with claims of Islamist militants fighting the security forces in the Sinai. The on-going clampdown on armed groups in the Sinai has sparked threats from an Islamist militant group known as the Salafi Jihadi. According to a statement released by the group, if the army does not stop the bloodshed, they would be “dragging [the Salafi Jihadi] into a battle that is not ours.” The group denies having any involvement in the 4 August attack, saying they never raised their weapons against the Egyptian army. The group further stated that their fight was with the “Zionist enemy.”

The army’s retaliation to the 4 August attack has led to many arrests and property raids, as well as retaliatory attacks from armed men. Last Sunday, two men opened fire on a police station in Arish before escaping and the following day gunmen opened fire in a nearby checkpoint. On Tuesday, Central Security Forces and military personnel were ambushed by armed gunmen in a vehicle as they left the town of Sheikh Zuweid. All three incidents left no casualties or injuries.

Al-Ahram reported that five detainees were released on bail in North Sinai pending investigation into their involvement with the 4 August attack. The five detainees are accused of plotting the attack, which has been blamed on Islamist terrorist groups by the government. The men were arrested on 10 August by police officers and armed forces.

The operation to clear the Sinai of suspected militant groups has been named Operation Eagle by the Egyptian armed forces. Due to the security vacuum in the area, the Sinai is believed to be a safe haven for militants and Islamist terror cells such as Al-Qaeda, but the Camp David Accords prevent any type of significant military presence in the region due to its proximity to Israel Al-Arabiya has reported that Israel has asked Egypt to remove their troops from the Sinai, but the Daily News Egypt has been unable to verify these reports.