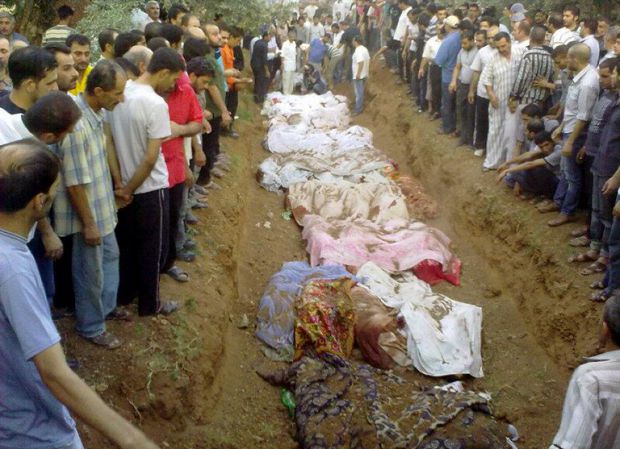 The United Nations Supervision Mission in Syria (UNSMIS) will come to an end on Sunday. Edmond Mulet, the UN’s Assistant Secretary General for Peacekeeping Operations said that conditions on the ground in Syria failed to meet the two conditions that would allow the UNSMIS to continue. “Those two conditions were the cessation of the use of heavy weapons and the reduction in violence from all sides,” said Mulet, who made the announcement on Thursday at UN headquarters in New York.

The UNSMIS pullout is another failure in the UN’s attempts at a diplomatic solution. Recent months have seen a series of decisions, declarations, and actions by the UN that have not halted the increasing bloodshed on the ground in Syria. On Saturday, the UN appointed a new Special Envoy to Syria, Algerian diplomat Lakhdar Brahimi, replacing Kofi Annan.

Syrian activists are angry at the UN for not doing more, and a recent bombing that occurred dangerously close to the Dama Rose Hotel, where the UN observer mission is based in Damascus, raised suspicions that some members of the Syrian opposition may be lashing out at the international body.

Khalid Saleh, a member of the executive office of the Syrian National Council currently in exile in Turkey, was quick to clarify that the UN was not a target. “The hotel which was targeted was not the Dama Rose Hotel,” Saleh told the Daily News Egypt. “The bombing took place in the General Commands Headquarters. This operation was carried out by the Syrian Free Army targeting the meeting place of rouge officers who are bombarding the cities with their aircrafts.” He added that civilians are not being targeted.

The recent attacks on cities with Syrian military aircraft have been seen as particularly savage in the eyes of the Syrian opposition. Sinan Hatahet, a spokesman for the opposition rebels, told the Daily News Egypt that these air strikes amount to a “barbarian attack” and that they point to a failure in the international community’s ability to protect the civilians of Syria.

The United Nations’ Under-Secretary-General for Humanitarian Affairs, Valerie Amos, spent much of this past week in Syria. In a statement released to the press on Thursday Amos describes a humanitarian crisis that is leaving 2.5 million Syrians in need of medical, food, shelter, and sanitary assistance.

Amos also stressed that, “The violence has become more intense and is too often indiscriminate. All parties must do more to protect civilians.”

Amos’s appeal for “all parties” to do more echoes Mulet’s exasperation that “violence from all sides” has not been reduced. These statements are part of an increasing shared-responsibility narrative, which the international community is begging to use to place the onus of responsibility on both belligerents in Syria.

Hatahet takes aim at this international criticism, saying, “We say openly, ‘Don’t ask the victims being sacrificed, whose hands have been tied in preparation for slaughter under your watch, not to move its feet during the killing because it takes the prestige out of the scene.’ We say to the world openly: ‘Defend the people in the morally sound way, or let them defend themselves in the way that they see morally sound.’”

The Human Rights Council report also discusses the non-lethal atrocities that are hidden by the headlines of death tolls. In particular, it outlines the sexual violence being committed by Government forces and the shabbiha, the plain clothed, government sanctioned gang that is wreaking some of the most vicious havoc in the Syrian conflict.

Rape frequently takes place when the army and the shabbiha enter a town, according to the UN report. Women, men, and children of all ages are raped, often repeatedly, some in their homes, others publicly in the street. One defected soldier talked about being ordered to surround houses while the shabbiha entered to rape the residents and another soldier talked about senior officers bragging to each other about the rapes they had committed.

In the wake of these rapes, some women have been abandoned by their husbands, one woman committed suicide, and one woman was reportedly killed by her brother-in-law to “preserve the honour of the family.”

The content of the UN report would suggest that rape by Bashar al-Assad’s Syrian Armed Forces is both rampant and systematic.

One man in Hom’s Bab Amr district spoke of 40-50 men in military attire entering his home before sunrise and raping his entire family. “The men raped [my two daughters] and my wife, forcing them onto the ground to do so. They raped them at the same time. When they began to rape my daughters, they forced me to raise my head and watch. You cannot imagine what that felt like, as a man to sit there and watch them do that. They raped each of them three times. Then they forced me out of the chair and ordered me onto the ground. They raped me as well and ordered my wife and children to watch. The men were jeering and said, ‘Look at your father.’ They destroyed me.”