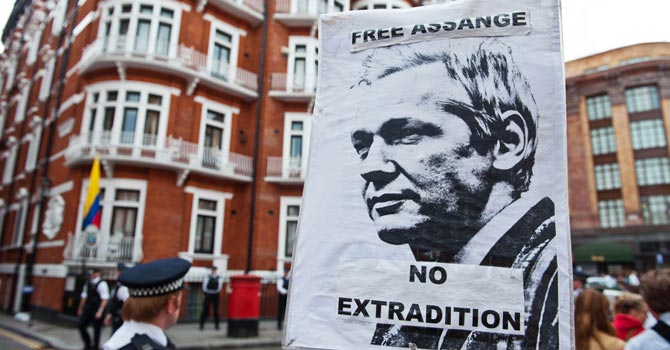 The controversial founder of WikiLeaks, Julian Assange, made his first public appearance in two months since taking refuge in the Ecuadorian embassy in London. Assange sought political asylum from Ecuador on the grounds that he is being persecuted for his role in running the whistleblowing wesbiste.

Assange’s lawyer, Balthazar Garzon, addressed the media outside the embassy today, saying that Assange “is in fighting spirits and he is thankful to the people of Ecuador and especially to the president for granting asylum,” said Balthazar Garzon. “Julian Assange has always fought for truth and justice and has defended human rights and continues to do so.”

Assange stepped out on to a balcony in the embassy and thanked everyone who has supported him. “I am here today because I cannot be there with you today,” he said, addressing his supporters. Assange thanked them for appearing at the embassy after police threatened to storm the building on Wednesday, saying “you came out to watch over it.” Assange told the media the only reason the United Kingdom didn’t storm the building, in violation of the 1961 Vienna Convention on Diplomatic Relations “was because the world was watching and the world was watching because you were watching.” The Convention guarantees under article 22 that the premise of a mission is inviolable, and may not be entered without consent of the head of the embassy.

Since Assange entered the embassy, British police have been permanently stationed outside with orders to arrest him if he leaves the building. The Government has also moved to apply legal procedures revoking the embassy’s diplomatic status should he choose to remain inside.

“The united states must renounce its witch hunt on wikiLeaks,” Assange demanded. “The US must vow that it will not seek to prosecute our staff or our supporters. They must pledge before the entire world that they will not persecute journalists that shine light on the powerful.”

The Guantanamo Bay documents contained memos, classified assessments of prisoners and interviews conducted at the controversial prison on Cuban soil at which America houses suspected terrorists. Other leaked cables suggest that the US would want to extradite him and Australia, his home country, would not impede an extradition. The Sydney Morning Herald reported last year that the Australian government had in secret discussed charging Assange with treason, the highest federal offence which carries a mandatory life sentence. Sarah Palin and former Republican presidential nominee Mike Huckabee have both said Assange should be killed.

Assange broke his bail conditions by entering the Ecuadorian embassy on 19 June. His request for political asylum in Ecuador was granted last Thursday. The President of Ecuador, Rafael Correa, delivered a message of support for Assange on his weekly broadcast to Ecuadorians. In his address he stated that Ecuador “never said that Julian Assange shouldn’t answer to the Swedish justice system nor contribute to the investigation into these supposed crimes… what we have always asked for is a guarantee that there won’t be a second extradition to a third country as that would put at risk Mr Assange’s life and freedom.”