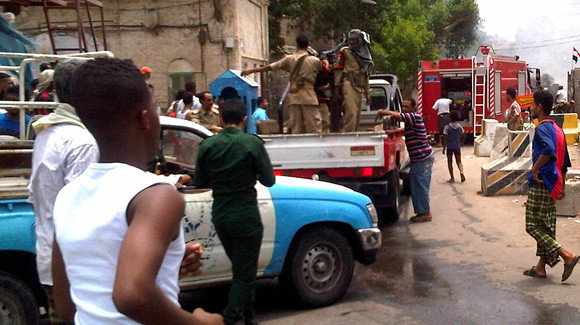 Fourteen soldiers were killed and seven injured during an attack on the Yemeni intelligence headquarters in the city of Aden, according to The Yemen Post.

Attackers hit the building with machine-gun fire and rockets, and after security personnel opened the gates to respond to the attack, a suicide bomber drove a car into the compound and detonated a bomb that collapsed some of the building and started a fire.

The attack is part of an ongoing war waged between the fragile Yemeni state and militants, many of whom are linked with Al-Qaeda. The United States assisted Yemen with an offensive this summer to beat back the militants, but now repercussions are reverberating throughout the country.

The Yemen Observer reported on another effect of the tit-for-tat conflict, writing that a suicide bomber attacked men in Abyan provine, killing a tribal leader and injuring six others on Sunday. The men were members of Popular Committees, groups which fought in collaboration with the Yemeni state in its offensive against Al-Qaeda and successfully kicked the militants out of Abyan. However, now that Al-Qaeda has begun a campaign of assassinations and suicide bombings, the members of the Popular Committees are targets alongside state institutions.

The Yemeni state faces an additional barrier in its fight with Al-Qaeda because the state security itself is increasingly dis-unified. Last week troops from the Republican Guard force attacked the headquarters of the defense ministry. The force was led by General Ahmed Ali Abdullah Saleh, the son of former-president Ali Abdullah Saleh, who was removed from power in February.

The US sees Al-Qaeda in Yemen as one of the most threatening belligerents in its “war on terror.”