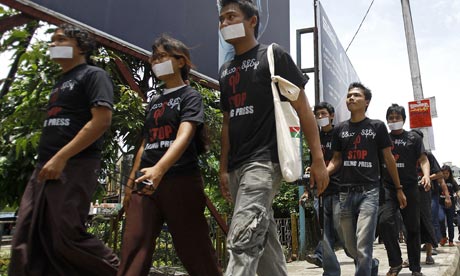 Myanmar’s government has pledged on Monday it will abolish media censorship by the Press Scrutiny and Registration Department (PSRD), a move that would turn the tide on a practice that has been in place since the military coup of 1962 brought the army into power. According to the nation’s Information Ministry, the abolition would mean that journalists would not have to submit final drafts of their work to the state censors before publishing.

While the move has been hailed a step forward in Myanmar’s pledge for reform, restrictive press laws that allow the government to shut down publications and take action against journalists deemed a threat to national security are still in place. Myanmar is ranked 169 out of 179 nations in the world for press freedom by Reporters Without Borders (RSF), a slight improvement from the 2010 ranking of 174, marking Myanmar one of the most press-restrictive nations in the world. In March, a report on Myanmar by RSF applauded the release of several journalists and other “prisoners of conscience” as part of the reform plans and said that, “while much progress is still needed, the reforms already underway would be difficult to reverse.”

The PSRD also suspended two weekly papers, The Voice and The Envoy, on 31 July for breaching media laws, a grave indicator of the progress yet to be made by reforms. RSF released an article on the abolition of state-run censorship on Monday saying they will “closely monitor the drafting of an announced new press law that is supposed to regulate the rights and duties of journalists and establish a code of conduct for the media.” This new press law, according to RSF, will also be used to create a Press Council.  “Reporters Without Borders is of the view that this [press] council must be fully independent of the government, while the media and journalists’ associations must be fully involved in the law’s drafting,” RSF said.

Since the 1962 coup, Myanmar has been under the control of the army that began a widespread nationalization campaign, bringing into their control businesses, education, media and general production. The country’s failing economy led to another coup-d’état in 1988, when civilians protesting the deteriorating economic situation were met with violence at the hands of the military. In 1990, the National League for Democracy (NLD) won 80 per cent of the seats in government but the military’s State Law and Order Restoration Council, the ruling body set up after the 1988 coup, refused to hand over power. NLD’s party leader Aung San Suu Kyi was placed under house arrest following the elections and remained under house arrest on and off for 15 of the past 22 years.

Since the constitutional referendum was held in 2008, the Myanmar military government has made some tentative steps towards the reforms they promised. The first general elections since the NLP’s victory were held in 2010, which saw the military-backed Union Solidarity and Development Party win a majority of votes. Shortly after, the military signed San Suu Kyi’s release, ending her extended period of house arrest and released hundreds of other political prisoners, as well as unblocked several websites such as the Democratic Voice of Burma, Reuters, BBC and YouTube. The country has also also been gripped by sectarian civil clashes in the state of Rohingya, where Buddhists have attacked Muslim communities, forcing some 80,000 Rohingya Muslims to seek refuge outside their territory. The government has allowed international aid efforts to enter the region and has announced the creation of an investigation committee that was praised by the UN General Secretary Ban-Ki Moon.