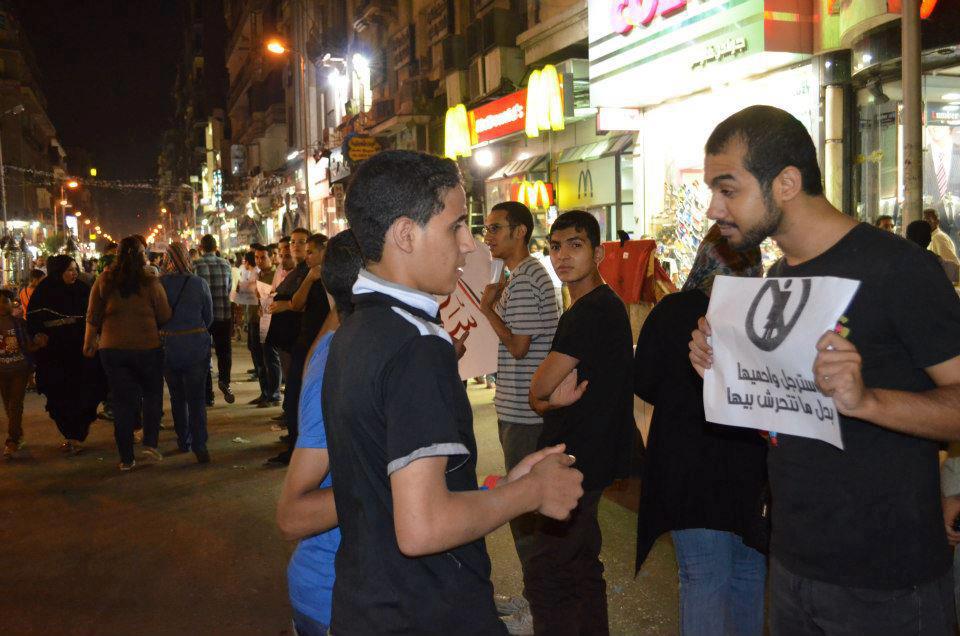 The Al-Dostour Party (Arabic for constitution) has held “no harassment chains” in the streets of Cairo on the first and second days of Eid, Monday and Sunday, a time which has seen a number of high-profile incidents of harassment over the past few years.

The participants in the chains held posters with statements like “do you know that 83 percent of women have been sexually harassed? Your sister may very well be one of them” and “Eid without harassment.”

On Sunday, the chains were held in Shobra Street, while on Monday they were held in first in Shobra, one of the largest districts of Cairo then in Tala’at Harb Street in Downtown Cairo.

“We chose this timing because there were always in the past years incidents of harassments and we also chose Tala’at Harb Street because it is the heart of these incidents,” said Osama Samir, a member of the party and organiser of the chains.

In 2006 a screening of a movie starring belly dancer Dina was followed by mass harassments of women in downtown Cairo.
“The people were really pleased with our campaign, especially older people. Younger people were a bit surprised actually, they were not expecting this at all.”

Samir said there were 17 people from the party in Tala’at Harb Street, but “ordinary people not from the party kept joining and the chain kept growing. I couldn’t tell how many people ended up joining the chain because I was in it.”

Of the thousands that passed by the chain in Tala’at Harb Street, only a handful challenged the campaign messages and opposed them, Samir said. He believes that the number of people who passed them in the busy downtown street could have been 12,000.

It was different in Shobra where the chain originally started at eight at night. “The streets were emptier in Shobra and it was rare for people to stop and ask us what we’re doing so we didn’t feel that the people were interacting with us,” he said.

The Al-Dostour party was launched in April by Dr Mohamed ElBaradei and it hopes to unite all Egyptians through its demands for “bread, freedom, social justice and dignity.”

In addition to the chains, the party promoted itself by holding activities before and after Eid prayer, held on the first day of Eid. The party handed out cards celebrating Eid and held up banners with similar messages throughout Egypt.

In response to their activities on the first day of Eid, Hassan Al-Brince, from the Muslim Brotherhood’s political arm, the Freedom and Justice Party, which has long been accused of using religion for political gains, was quoted by said state-run Ahram Gate as saying “ElBaradei’s party’s decision to hand out flyers in time for Eid prayers is an official declaration ending the term, religion should not be used in politics.” He added that it proves that the Muslim Brotherhood has always understood the relationship between religion and politics.

Al-Dostour interim media spokesperson Ahmed Gamal, said the “party was not mixing religion with politics.
“These aren’t even times of elections,” he added.