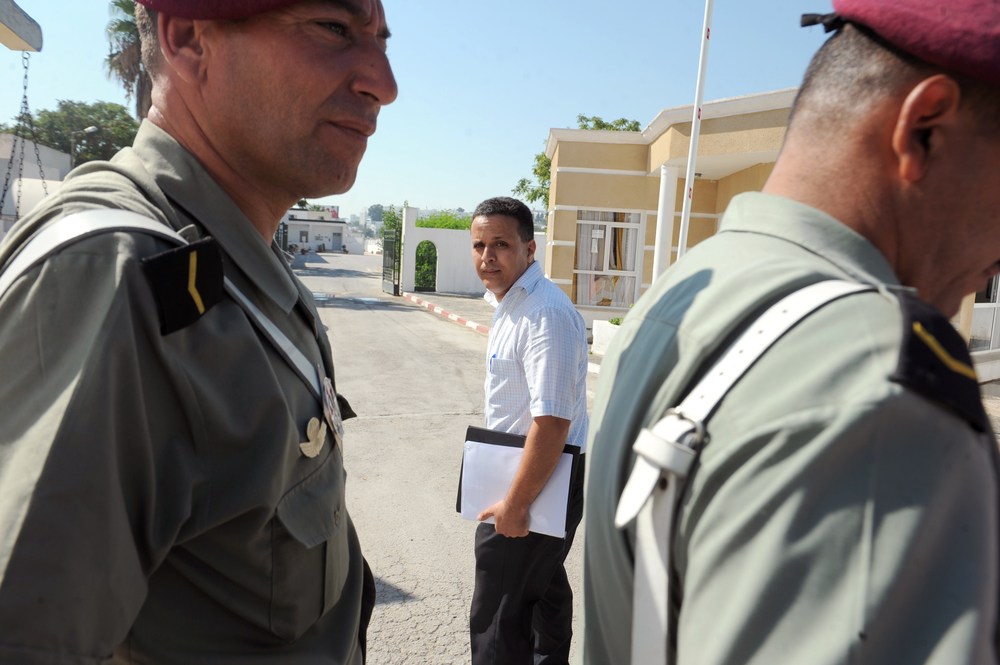 Ayoub Massoudi, former advisor to the Tunisian President Moncef Marzouki, is slated to appear before a military tribunal beginning Wednesday. He is being charged with “outrages against the flag or the army” and “defamation of a civil servant.”

The accusations stem from Massoudi’s vocal criticism of the military and the government in post-Revolution Tunisia, particularly Minister of Defense Abdelkarim Zbidi and Chief of Staff Rachid Ammar.

The most recent post on Massoudi’s blog, Political Games, rails against those in power.

“There is no doubt that the regime did not fall,” reads Massoudi’s last blog post, dated 12 August and titled “Sidi Bouzid … The Mafia.” The post continues: “The government Troika and its parties have betrayed the Revolution and the blood of its martyrs by allying with the components of the old regime, to repeat the rule of fire and iron. Degrading the Tunisian citizen with every tool of oppression there is: physical, psychological, social, and economic – which is the fiercest way to oppress people and make them submit.”

Massoudi quit his post as presidential advisor earlier this summer after the extradition of Gaddafi-era Prime Minister Al-Baghdadi al-Mahmoudi back to Libya. Massoudi was angry with the fact Zbidi and Rachid had not informed the president that the extradition was going to take place.

Human Rights Watch (HRW) issued a report on Wednesday that claims the charges against Massoudi violate his basic rights to a fair trial and free expression.

The jurisdiction of military courts to try civilians is far too broad argues Amna Guellali, the Director of Human Rights Watch in Tunisia. After the revolution, there was widely praised judicial reform in Tunisia. “The prevailing feeling was that in the beginning they had done very important reforms,” Guellali explained in an interview with the Daily News Egypt. “But it is not sufficient in our view; their jurisdiction is still very extensive. It is something we are fighting because it invites abuse and can be used as a tool to stifle dissent.”

Guellali says that the Massoudi trial is part of a wider trend in Tunisia where there are increasing limitations on freedom of expression.

“The right to subject public officials to scrutiny and criticism is one of the most basic elements of freedom of expression,” Eric Goldstein, the Deputy Director for Middle East and North Africa, says in the HRW report, adding that it is “essential to promote debate about matter of public interest.”

Guellali points out that these methods of repression are strikingly similar to those used by the rulers that the Tunisian Revolution was meant expel. “It’s not something new, it’s from before,” she says. “Throughout the dictatorial regime, the military tribunals were used to conduct unfair trials against opponents, throughout the nineties. They did the job for the authorities. There was no real fair trial process.”

A further irony is that Massoudi himself specifically spoke out against military tribunals. Massoudi criticized the trials that took place to hold accountable those who committed crimes during the uprising. “During the [post-Revolution] trials there were some elements of discretion, inconsistency, and failure to unearth the truth of what happened,” says Guellali, “which makes people doubt the whole process of the military tribunal.”