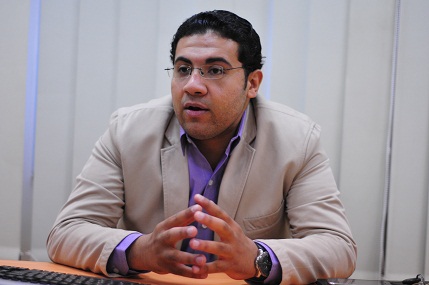 DNE speaks with Ahmed Khairy, the official spokesperson for the liberal Free Egyptians party, on what steps his party is planning to take in the coming phase in light of Morsy’s presidency and Heshan Qandil’s government. Khairy also speaks about the Free Egyptians’ relations with the newly-born parties of ex-presidential candidates.

We start by addressing the role the Free Egyptians Party has played following the dissolution of the Parliament. In light of your previous coalition with other parties under the Egyptian Block, do you have plans to rehabilitate your party cadres for a forthcoming electoral round?

After the parliament’s dissolution, the Free Egyptians, together with almost all political parties, has entered a stage of relaxation and hibernation, awaiting the political picture to be clear enough. We are now witnessing an ambiguous political scene, where successive court rulings involving the Constituent Assembly are inconsistent. It happened once that a court ruling was rapidly issued, and in the following time the ruling was adjourned. The Constituent Assembly will come up with the Constitution, which will result in countless things.

Regarding the forthcoming elections, we have started internally to focus on locating new cadres who can run for the elections. Meanwhile, on the external level, we have commenced dialogue with other civil political parties with hopes to find the best possible coalition we can be part of in the coming elections.

What sort of coordination have you either conducted or planned to establish with the newly-form civil parties such as Strong Egypt and Al-Dostour?

I see that all of these parties are promising. Al-Dostour benefits from the presence of Mohamed ElBaradei and the Popular Current enjoys the leadership of the ex-presidential candidate Hamdin Sabahi and his popular Al-Karama front. However, Dr. Abdel-Moniem Aboul-Fotouh is quite distant from us as a civil party, and is rather closer to the Al-Wasat and Al-Hadara parties. While he shares a minor common ground with us, he stands much closer even to the Muslim Brotherhood than to the civil current. We have established talks with Al-Dostour party and with Sabahi, but without any concrete agreement yet.

When will you declare your electoral programme?

It will be after Ramadan. In addition to the nature of Egyptians in the holy month, everyone awaits the announcement of the full cabinet formation, which is due tomorrow. Nevertheless, it is expected that the picture will have become clearer within the Constituent Assembly after Ramadan. Before even getting into our electoral preparation, we will start first thinking of the best electoral law that can grant just representation to all diverse currents, and which prevents domination by whatever political current over political life, had this current been civil, Islamist, liberal or else. The domination concept is rejected as the situation in Egypt now is so difficult to the point of making the contribution of all currents mandatory.

What have you gained and lost from your coalition with the Egyptian Democratic Party and Al-Tagamoa Party, and are you considering maintaining this alliance in the coming elections?

We have benefited from this experience, which had positives and negatives for sure. The Free Egyptians and the Egyptian Democratic Party are two post-revolution political entities that succeeded in directly following the well-established Al-Wafd, Al-Nour and the Freedom and Justice parties. We find this result rational and convincing in light of the tight two-month interval preceding the elections, where we have been less efficient than our experienced counterparts in preparing cadres and reaching out to people. I believe that the trend in the coming elections will be to unite civil parties in alliances exceeding two or three parties. The numerous civil parties that ran for the last elections did not help any of them, taking into account that this diversity was between nascent parties with little ability to drive Egypt’s political scene. The civil current was divided between the Egyptian Block, Al-Wafd, Al-Wasat and the Revolution Continues.

What is the nature of your relations with the recently established Life of Egyptians Party, led by the ex-Free Egyptian parliamentarian Mohamed Abou-Hamid?

We do not have any relations with the parliamentarian Mohamed Abou-Hamid. There is no intent to establish a coalition with Abou-Hamid due to his adoption of a political line that deviates from what we are hoping for this country at this current phase. The main disagreement with Abou-Hamid is his determination to be classified as anti-Brotherhood, a stance we believe will inevitably meet failure. In my personal opinion, any entity that is established to counteract another entity represents a failed and bankrupt case.

What is the current role of Naguib Sawiris in the party’s activities?

Sawiris in reality has no role. He was the man who called for the establishment of the party, but has no administrative roles. He is one of many supporters and fund providers. While some see that his supporting of the party has been a negative experience, I personally believe that his presence was beneficial for the party.

But what do you say in response to accusations against Sawiris of forming the Egyptian Block with the aim to gather Copts to counterweigh the Muslim Brotherhood on sectarian grounds?

I do not believe that this was the fault of Sawiris as much as it was an issue with the general political climate. The Muslim Brotherhood has unfortunately been following a systematic defamation process against any prospective political competitor. This happened with ElBaradei, Sabahi and Aboul-Fotouh.

What is the party’s reaction to Mohamed Morsy’s win in the presidential elections?

Dr. Morsy is the president of the Arab Republic of Egypt. He was not the first choice of the Free Egyptians and neither was Ahmed Shafiq. Polling stations came up with Morsy as president, and we hope we will act as a president for all Egyptians. President Morsy’s performance so far has shown his allegiance to the Muslim Brotherhood overriding his basic definition as a president of all Egyptians. What we are pursuing is to ensure that decision-making is solely carried out by the president himself, and not by the Supreme Council of Armed Forces or the Guidance Bureau. As such, I believe our role in the next stage will be to act as the opposition.

Regarding the Constituent Assembly, do you believe that postponing the jury’s response has given the assembly sufficient time to write the constitution?

We question the decision to postpone the jury’s response until 24 September 2012, taking into account that this is only a response that does not take time usually, and not a court ruling. At the end of the day, this is the court decision, and we have to respect it even if we disagree with it. The main issue with the Constituent Assembly is social before being political. It suffers from dominance by a particular current, and hardly enjoys complete social representation. It lacks the accord of Egyptians in general, and political parties in particular. In my estimation, this assembly might well produce a mutilated constitution, in light of the talk about sovereignty to Allah, Article 2, the role of Al-Azhar and the length of presidential terms. This has also revealed that many among the Constituent Assembly members do not appreciate the meaning of writing a country’s constitution.