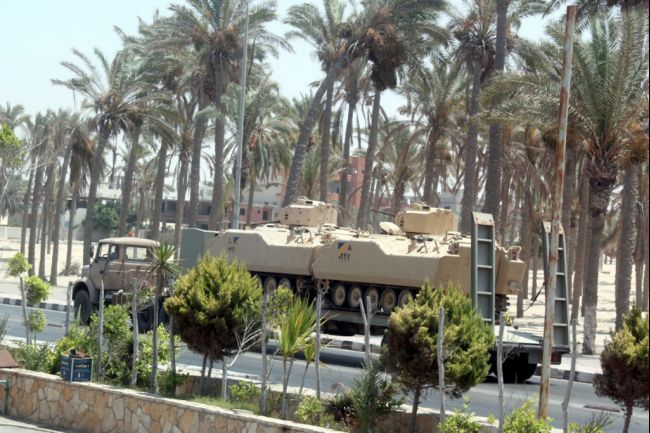 “No comment,” is the phrase of the week when dealing with the recent spate of media coverage regarding Israel’s position on the current Egyptian remilitarisation of the Sinai. The Israeli newspaper Maariv published an article on Tuesday which cited unnamed officials expressing the Knesset’s worry of the breach in the Camp David Accords by Egypt.

Maariv’s article cited unnamed officials from within the Knesset, who had said the Prime Minister Benjamin Netanyahu had expressed “concerns” that Egypt had not spoken to Israel about deploying tanks, aircrafts and troops within the Sinai. The Egyptian Al-Ahram newspaper quickly picked up the story, as did the New York Times, the Jerusalem Post and the Washington Post. On Wednesday Al-Ahram ran its own story on the issue which cites an unnamed Egyptian military source from Sunday as saying that the operation is well co-ordinated between Egypt, Israel and the US.

On Wednesday, the Washington Post ran an article with the headline, Israel says Egypt violating peace treaty by moving tanks into demilitarised Sinai. The article makes mention of Al-Ahram’s dismissal of the claim but asserts through their own unnamed security sources that the claim is genuine.

The Daily News Egypt could not verify the claim, as Israeli, Egyptian and American officials have refused to give a statement indicating one way or another. The Acting Spokesperson for the US Embassy in Cairo, David Linfield, responded to the claims by telling the Daily News Egypt that “the Egyptian government has of course expressed its desire to improve security in the Sinai and the two sides are in communication with one another.”

The Sinai is divided into three sections by the Camp David Accords. Each section of the Sinai has a maximum allowance of military presence. Area C, the area along the border with Israel and Palestine, is meant to be completely demilitarised. Since the signing of the Camp David Accords in 1978 and the peace treaty in 1979, Israel and Egypt have witnessed a three decade period of peace, but the peace has been met with weary suspicion, especially after the election of Egyptian President Mohamed Morsy and the sacking of Field Marshal Mohamed Hussein Tantawi.

Morsy, a member of the Muslim Brotherhood is seen as a potential threat by Israel, due to the Brotherhood’s well-known stance against Israel. Since coming to power Morsy has edged closer to Hamas, who is ideologically aligned with Morsy, promising to re-open the Rafah border crossing into Gaza indefinitely before the Sinai attacks on 5 August led to the closing of the border for an unspecified amount of time.

Tantawi himself served under the former President Hosni Mubarak and reinforced the peace with Israel. Tantawi’s removal and the Brotherhood’s ascension to power are understandably a cause for concern for the Israelis, who must now deal with new players who’s position on the peace treaty have not yet been made clear, but the security in the Sinai is in itself a major cause of concern. The Sinai as it currently stands is a haven for armed militant groups which threaten not only Egypt’s security, but Israel’s and Palestine’s as well. Kidnappings, pipeline attacks and incursions into Israel and Gaza have been common practice in the Sinai, straining regional relations and negatively affecting tourism.